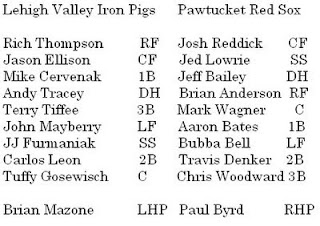 Someone on the second floor of the building next to mine has a broken window fan that they leave on forever. I suspect they are stone deaf, since I can barely handle the steady, LOUD, "CHOPCHOPCHOPCHOPCHOP" sound floating in through my open window. I should just buy them a fan and leave it on their doorstep.

Paul Byrd got the start for the Red Sox and I think he should have been on this team from day one. Seven innings from a Pawtucket starter was the sole domain of The Redneck Asshole. Seven innings, like Devern Hansack used to do. Hansack IS still alive, right? RIGHT?

Byrd's only mistake was a John Mayberry solo home run. Mayberry's a star, though, so it's okay. Hunter Jones came in afterward and gave up a solo home run in the ninth to tie the game.

But that was okay, too, because in the ninth, Velazquez singled and Lowrie and Reddick walked. Bailey flew out to right and Gil Velazquez ran home. 3-2.

hello:
1. Second baseman Carlos Leon had only one at-bat, in spite of playing a full game. Leon sac bunted, grounded out (one at-bat), and, um, sac bunted. Carlos Leon just loves you and wants you to be happy. You have affected his life negatively in the following ways:
2. Mike Cervenak hit a solo home run. Jed Lowrie hit a solo home run.
3. Pawtucket left seven runners on base.
4. George Kottaras pinch hit for Woodward in the seventh. Velazquez played third for the rest of the game.
5. Aaron Bates was intentionally walked by Jake Woods in the eighth inning. To get Bubba Bell out. It worked, but dude. Bates is batting like .211. Are you really that chickenshit?

hello again:
1. Brian Mazone was a spot starter for Lehigh Valley. They play Pawtucket tomorrow night and then fly away, like pigs made of iron. Like lightweight iron.
2. I was at the park the other night for the extra inning game that the Red Sox lost. It was painful and degrading. I did notice that the relievers are growing tomato plants in the bullpen. I think TJ Large has a green thumb.

Tomorrow! Rodrigo Lopez (The former Orioles guy!) versus the awfully swell Randor Bierd. I think I love Randor Bierd. Hey, not the way you're thinking... I wanna have SEX with Randor Bierd!

I don't know if this woman wants to hug me or stab me.