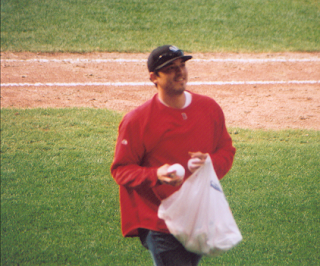 Pawtucket just lost their day game. I was going to go, but I slept really late. It's okay: Paul Byrd tonight! But Charlie Zink.... wow.

Charlie Zink: My Life with the Red Sox

Red Sox: Okay, he said you were cool. have you ever been to maine?

(later) Zink: Here I go, over the bridge, ta-dah! Rhode island! Then back to Maine! then pawtucket! Oh no, tollbooth!

(later)Zink: new england is too cold! I am gonna quit and go to the national league!
Red Sox: Oh my gosh, no! Stay here! we love you! You're gonna be a big star at fenway!
Zink: O Okay.

(later)Zink: It sure is great to be hanging out at my apt with Pauley
Red Sox: ring ring Hello! can you come to boston right away?
Zink: FINALLY!

(later)Zink: wow, that was cool. Too bad I sucked. But I won the international league!!

(later)Zink: This sucks. I can't wait to play golf for the rest of my life.
Red Sox: see, we told you we had plans!

Wait until I see Kottaras. I'm going to run up to him and give him a chocolate gun.

Let's get some burritos.
Posted by Jenks at 2:56 PM

FAN: its your hat
ZINK: you given it back to me?
FAN:no!
ZINK:ha
FAN:(turns) here happy birthday
ME:AWSOME!!
one of the greatest gifts ever
thanks jen!

You're welcome! Charlie Zink sucks... but at least he's a guy who can (something) (something) after work.