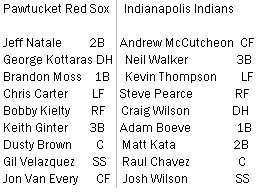 2002 #1 overall draft pick Brian Bullington started for Indy and gave up seven runs in 1 2/3 innings. Then some other relievers on the Pirates AAA team came in and ZZZZZZZZ...

The good part! Brandon Moss took it upon himself to go gorilla. Moss had 5 RBI, doubling and homering for Pawtucket. Jonathan.. you know, let's make it Jon. Or John. Jonathan Van Every is too cumbersome. So JVE had himself a great night out of the nine hole. 4 RBI with a double and a home run.

Chris Carter went 5-6 with a double and 3 RBI. Kottaras remains hot, batting in a pair of runs. Jeff Bailey hit his first home run of the season. In fact, everyone in the lineup got a hit except little Jeff Natale. Think he'll hear about it on the flight back to Warwick?

For Indianapolis, the lovely and talented center fielder Andrew McCutcheon hit his fourth home run of the season off Zink. He must get mad ladies.

1. Odd blowout move: Indianapolis had pitcher Jesse Chavez bat for Neil Walker in the seventh inning. Can they do that?
2. Brandon Moss got a break from the taxing first base thing when RJ put him out in right field in the fifth. Must be like coming home and taking off your work shoes... and putting your old, comfy sneakers on. Or it could possibly be like sawing your own legs off.
3. By the way, Pawtucket lost last night. Michael Tejera gave up a grand slam to Steve Pearce and that was pretty much it. I didn't write about it because I found it uninteresting. Or because I was lazy.

Pawtucket's all done with the Indians. Okay? Thank god. They're back home tomorrow night to open a series against the struggling Buffalo Bisons (CLE). Chris Smith will start, fireworks to follow. Which is fun if you're a BABY!
Posted by Jenks at 11:24 PM