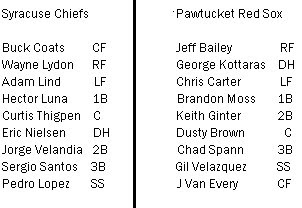 So weird to see the PawSox winning. Yr. starting pitcher was Michael Tejera. Mikey T pitched six solid innings, striking out four and walking one. He gave up a solo home run to Syracuse's Eric Nielsen.

Cool, weirdo reliever Jo Matumoto came in for 2/3 of an inning, then came Jordan De Jong. The pair did not allow further Pawtucket runs, but alas.

George Kottaras homered yet again. Dios mio, what's going on with him? Gil Velazquez and Brandon Moss both doubled. Van Every went 0-3 with two strikeouts, but you can't expect too much from the bottom of the order.

It was Eric Nielsen's first ever AAA game and he had a great game in spite of the loss. A home run and a single. Good luck trying use a search engine for the guy. There're a lot of newsworthy Eric or Erik Nielsen's out there.

Look at me... I'm an elephant rider!
1. Jeff Bailey was the leadoff batter once again. Tonight, he successfully stole a base. RJ is deliberately messing with us.
2. I know batting average is something of a crap statistic, but Chad Spann is batting .139. He's also struck out 16 times in 13 games... but only walked twice. OBP? .205 What a mess.
3. Sergio Santos! I guess he decided against converting himself to a pitcher.
4. Pauley's back in Pawtucket, probably miserable. Sometimes you pitch and you don't have a great game and it sucks. And then sometimes you don't pitch well and it could flush your career right down the toilet. Is Boston likely to call him back up? I don't know. I feel bad.

Tomorrow's starting pitcher is Charlie Zink. Lefty Bill Murphy will start for the Chiefs. Wait, who?

Finally, check out this picture from tonight's game... dig the message on the scoreboard. Whoa!