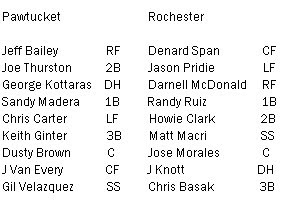 Word on the street is that this game was unbearably cold. I listened to some of it on the radio and I could hear people in the stands talking...clearly. So it must have been pretty empty.

Tenacious David Pauley pitched five innings, only giving up one run. He walked one and struck out three. The ensuing five runs were given up by Edgar Martinez, who is really no kind of reliever. Martinez pitched 1 2/3 innings. Jon Switzer and Lee Gronkiewicz finished the game off without further incident. Gronkiewicz has really been a bitchin' reliever for Pawtucket. Hats off to Mr. Lee.

Kevin Mulvey pitched 4 2/3 for Rochester. Pawtucket knocked in seven runs while he was on the mound. It was great. Blammo! Hey Kevin... POW!!! Casey Daigle came tumbling after, giving up the eighth run. The Amazin' Carmen Cali pitched the eighth and ninth innings. I'm a big Carmen Cali fan. Really? Yes.

Sandy Madera (children at your feet... wonder how you manage to make ends meet?) is like Clubber Lang out there. Madera hit a three-run homer off the ineffective Kevin Mulvey. Educated meathead Chris Carter tripled off Carmen Cali (hey!) but it was really almost like an error. Darnell McDonald could have maybe had that. I think.

Gil "Ocean Breeze Soap Will Get You Clean" Velazquez and Jonathan Van Every both doubled. JVE also struck out three times. Oops! Keith Ginter went 0-5 but it's okay because he's a really good fielder. Not like Chad Spann.

For Rochester, Darnell "Braveheart" McDonald hit a grand slam. He's my favorite. DM also doubled, as did Alexi Casilla who pinch hit for Matt Macri in the first inning (?)(!). What the hell?

Denard Span was caught stealing and picked off like an old scab.

let's get back to the countdown:
1. Please note that Jeff Bailey batted leadoff again. He had a couple of hits, a walk, and an RBI. I don't know what else to say about this except that it's like making Ramiro Mendoza a starter. Struggling in one role, kind of succeeding in another unlikely role. I am probably the only earthling who cares about this.
2. Sandy Madera! Damn! I'll tell you what I know about Madera... he uses a lightweight bat. As in Julio Lugo's bat. I know this because he gave it to us in Buffalo after the game. You think I am kidding? I'll take a picture of it, asshole!
3. Wait, Madera is 27? Where have I been?
4. Matt Macri hurt himself in the first, which explains the pinch hitter. I'm reporting this news as I find out, not as it happens. It's called Gonzo Journalism, my friend. You can't catch me, I'm the wind!
5. Former Twins' GM Terry Ryan was in the house for this game, probably wrapped in a blanket with a nice cup of cocoa. Does he even have a job?
6. Bailey's 4th inning hit almost pegged baserunner Van Every... he had to leap out of the way.

Tonight: Michael Tejera v. Brian Duensing. Lefty lefty! That's always a draw. I'll be back later on with pictures etc. from my weekend in Buffalo with Mike Lowell. Hasta.
Posted by Jenks at 11:26 AM