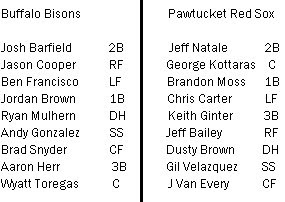 I should just skip to the good part, but I will reluctantly talk about Kyle Snyder and Jeremy Sowers & co. Snyder pitched four innings and wasn't great. Two home runs, four runs, a walk. Four K's. 59 pitches. Thank you, Deborah.

Other pitchers for Pawtucket: Dan Kolb (2 scoreless), Craig Hansen (one and 1/3 scoreless with 2 Ks), Abe Alvarez (2/3 inning, more scoreless goodness), Lee Gronkiewicz (one inning, one run, one blown save), and Linc Holdzkom (10th, walked a couple of batters but held it down).

Jeremy Sowers pitched 4 2/3. He only gave up one run and struck out six batters but his pitch count was up to 92. He came out of the fifth for Elarton (Scott), who faced Kottaras and struck him out. Also pitching: Edward Mujica, Rich Rundles, Rick Bauer, and Reid Santos. Each team used six pitchers, which will make your scorecard look like crap.

Keith Ginter seems to be emerging from his slump a little bit, going 3-4 with a home run. Catcher George Kottaras went 0-5 with a strikeout. JVE doubled. So did Gil Velazquez, who won this freaking thing for Pawtucket. It was the tenth inning. Jeff Bailey singled. Dusty Brown singled. GV steps up and bats in Jeff Bailey from second. So it was either a solid single to right or JB ran like yo mama. Okay, Velazquez gets the credit, even though he singled to LEFT, not right.

we think we know what the problem is:
1. Pawtucket is now 11-8, in third place in the IL north, and two games behind the Yankees. How is it possible that even the AAA team of the Yankees annoys me with their success?
2. Josh Barfield was born in Venezuela. His mother was there visiting his father (Jesse) during winter ball.
3. Van Every's doing pretty awesome, but he is still only batting ninth. He's leading the team in BA (.333) and slugging and OPS (.976). I'm no baseball genius, but... really. In a related story, perhaps Brandon Moss, (who can't stop striking out) should be dropped lower in the order.
4. I can't wait to do team leaders for April! I also can't wait to recklessly insult the players who are underperforming!