4.3.08 PawSox v. Indianapolis Indians - this song is for your parents 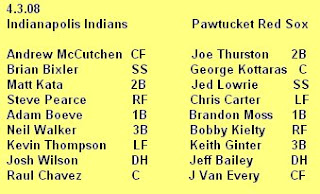 Your number one starting pitcher was Bartolo Colon. BC K'd five guys, walked one and gave up a hit. Craig Hansen provided two subsequent innings of relief, walking 2 and striking out three. Eighth inning belonged to Dan Kolb (one walk and no hits) and Mr. Lee Gronkiewicz closed it out uno, dos, tres. YEAH.

Kottaras also made an error trying to throw out the base-stealing Adam Boeve. His throw to second was... whoops... way over Thurston. This is really great stuff coming from a guy batting second (!).
2. I'm convinced that Chris Carter is permanently eye-blacked. Day games, night games, in the shower, during marital relations, at church, everything.
3. The Indians black uniforms were a great background to Colon's pitches! You could really see where he was locating the ball.
4. 2008 will be Jeff Bailey's fifth season in Pawtucket. Wow, what?
5. Much pageantry involving the police and the firefighters. Bagpipes and the singing state trooper. Blackhawks and salutes.