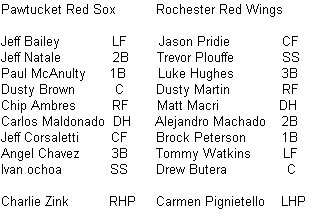 Charlie Zink was wild, giving up six walks in 4 1/3. That and four hits led to four runs. But it's not just that - Alejandro Machado, Matt Tolbert, Matt Macri, and Dustin Martin all stole bases on Zink. CHRIST!

Zink also threw a wild pitch. 99 god damn pitches and not even out of the fifth. Well, CZ had a strikeout, so there's that.

Hansack tough-guyed his way through one inning, throwing 25 pitches and giving up two hits and a run. And it looks like he hurt his arm. Lefty Chris George pitched the rest of the game, giving up a hit and walk but no runs.

Lefty Red Wings Starter Pignietello got four innings in, giving up two runs, dude. Jose Mijares got the save. A few other guys pitched in between, but really, is that the real story?

fatigue's set in:
1. Dusty Brown doubled and made an error.
2. Devern Hansack had to go to the hospital. Did his shoulder pop? Poor kid.
3. Gil Velazquez got called up! That is happy news! He gets to leave frigid NY for sunny...ish?... Oakland.
4. Jason Pridie got ejected... I'm assuming he bitched about his caught stealing call.