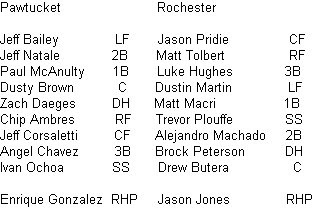 The Red Wings jumped all over Gonzalez right away in the first inning, scoring four runs. Pawtucket timidly responded by chipping away at the lead. Bailey solo homered in the third inning to get the party started.

Pawtucket got even closer in the fifth when Angel (It's Angel! NOT 'Angle'! Stupid fingers...) Chavez singled and Jeff Bailey homered again. He put on a homer show!

In the seventh inning, with the Red Wings not having scored since the first, Angle (screw it) Chavez singled. Ivan Ochoa walked. Roch. pitcher Sean Henn is gently and sensitively removed from the pitcher's mound. Bob Keppel comes in to face Jeff Bailey... a passed ball moves the runners up and Keppel walks Bailey.

With Natale at bat, Keppel throws a wild pitch, scoring Chavez. Natale flies out and sacrifices Ochoa home. And the next two batters go down pretty quietly... how silly can you get?

So the Red Sox are ahead 5-4 going to the bottom of the fourth... but Rochester ties it up. Catcher Drew Butera doubled off Traber and then Luke Hughes singled off Traber's replacement, Jose Vaquedano. Hughes' single brought home Butera to tie the game.

Rochester scored again in the eighth. Alejandro Machado and Hunter Jones were involved. Can you imagine those two making conversation in an elevator or something?

Pawtucket could score no more runs and lost the game, returning to their hotel rooms with a case of the blues.

Ocean Breeze Soap will get you clean:
1. I'm really sorry for using the played out phrase "get the party started". Ugh. I promise I'll try harder next time. While I'm at it, I should avoid saying "played out".
2. Bailey was the RBI King tonight with three. Jeff Natale had the fourth.
3. Marcus McBeth continues to pitch well, handing in a scoreless inning with no hits or walks and two strikeouts. He has not yet given up a run. Take that, Napoleon Bard-amite!
4. Enrique Gonzalez balked. He also threw 94 pitches. Kinda high for early April?
5. Rochester's winning pitcher was Ben Julianel.
6. RJ Sez: “Bailey, breaking out of a so-called slump is on a par of me getting up in the morning and having a coffee and donut. It’s going to happen."
7. Hansack's on the DL for a week or so. Righty Rocky Cherry is in town along with Travis Denker. Denker is your new Gil Velazquez.