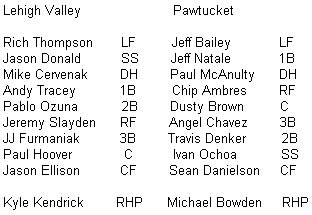 Fernando Cabrera and Daniel Bard's combined relief held the I-Pigs scoreless. It should be noted that Cabrera is much, much hotter. Cabrera also pitched more than twice as many innings as Bard. If that sounds like a word problem, then you must also have the same nightmares about high school as I do.

Your visiting Phillies-style pitcher was right-handed Texan Kyle Kendrick. KK gave up five hits and two runs in four innings. See, what had happened was, Bailey singled in the first and then Paul McAnulty hit a home run. Big fat Tyler Walker, lefty Jake Woods, and Gary Majewski wrapped up the final five innings with serious no-hit action. They should be happy, because triple-A is not about the wins... it's about the individual performance of a bunch of Phillies minor league relievers!!

but it's the end of the semester:
1. San Francisco Giants fans may remember Tyler Walker as the reliever they most wanted to kill with an axe. Anyway, he's a new Iron Pig... Rodrigo Lopez is on the DL or something.
2. I just might love Paul McAnulty.
3. Looks like Wilkerson retired. Sheesh.

See you guys tomorrow. I'm at the park tomorrow and Wednesday. I hope the rain obliges us all.
Posted by Jenks at 8:22 PM