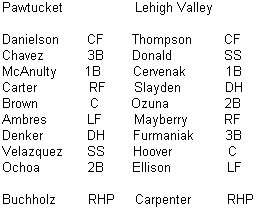 Clay Buchholz got the start for Pawtucket and pitched six innings, giving up one run on three hits. Fernando Cabrera worked the middle and Traber ruined Christmas in the 12th with a pretty anti-climactic RBI single hit by Paul Hoover, the catcher who's also a vacuum!

Big righty Andrew Carpenter started for Lehigh Valley and is obviously a much better pitcher, since he pitched into the eighth inning and only gave up one run, an RBI single hit by Sean Danielson.

are you almost finished?
1. Danielson batted leadoff. Captain Awesome Angel Chavez has been kicked upstairs in the lineup. So RJ's mixing it up.
2. E6! Gil Velazquez missed a catch from second baseman Ivan Ochoa in the ninth and effed up the double play.
3. Much-maligned reliever Tyler Walker got the win, pitching three scoreless innings and making it look easy.
4. Whoa, sorry: It's not 'Andrew', it's DREW Carpenter.
5. Since's GV's back, is Suarez Portland bound?

Bus trip to Syracuse for two games, then home for hot, wet, Braves action. See you tomorrow!
Posted by Jenks at 11:56 PM