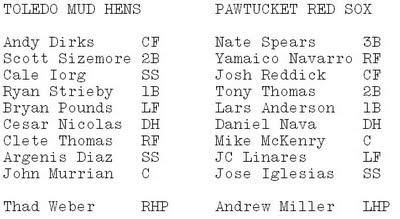 Mud Hens WIN! 4-3. Lefty Andrew Miller got the loss for Pawtucket, working three innings and giving up three runs on four hits. If I can surmise something from a set of numbers on a computer monitor, it is that Miller had control problems: Five walks, 84 pitches in three innings. Well, Miller started the fourth inning, but leading things off with single-walk-single is the kind of thing that gets you replaced.

But I'm not trying to crap all over Andrew Miller or even delve into what his problems might be. I mean, let's look at Mud Hens starter Thad Weber. No matter how homely he is. Weber pitched five and 2/3, gave up three home runs and still got the win. He did, however, strike out nine PawSox dudes.

Perhaps I should put this thing in reverse. The PawSox walk backward onto the field, slowly, and assume their positions. Okay, no, not like that. But not all the way to the first inning either. Although if I were at the game, I might have been impressed with Weber's first inning because he got Spears, Navarro, and Reddick to strike out swinging. Right in order!

Bottom of the third, no score yet. Catcher Mike McKenry leads off with his first home run of the season. Good job, Mike. JC Linares follows that up with a home run of his own. 2-0 Red Sox.

And here comes the pivotal fourth inning. Miller's pitching and he walks DH Cesar Nicolas. Outfielder Clete Thomas singles and Our Heinous Diaz walks to load the bases with no outs. If there's any man I want out on the hill in this situation, it's Atchison. Looks like Beyeler agrees, cause here he comes. Catcher John Murrian hits a fly ball to to right... Back! Back! Caught by Navarro! Nicolas tags and scores, 2-1 now. CF Andy Dirks hits a line drive to center, Thomas scores! Tie game!

Atchison now has to face Scott Sizemore, who everyone is afraid of even though he gives his mother flowers and that. Sizemore tripled to right, scoring Diaz and Dirks. Sizemore then tried to steal home, which is usually a pretty terrible idea... Sizemore didn't make it and it's not because he's fat. It might be that he should have hooted wildly like Daffy Duck the whole time.

Pawtucket slapped a run up in the bottom half of the inning when McKenry hit a second solo home run. That's so weird. But the rest of the game was scoreless, so fantastic job by all the young dudes in the bullpen. Michael Bowden pitched three scoreless innings and had six strikeouts. What the fuck. It's official: Bowden is now a pod person, inhabited by a space creature who feeds off opposing teams' whiffs.

The Incredible Rich Hill had a ten-pitch eighth inning, striking out Nicolas and Thomas. How do you not feel like a badass doing something like that? I would watch it on video over and over. Yes, sir, that's my baby.

5. Andrew Miller is a Heel.

Hey, whatever happened to Jordan Tata? What a cutie.

Tonight! Victor Martinez is rehabbing, if you're into that freaky shit. Otherwise, it's Charlie Furbush and Brandon Duckworth. Duckbush.