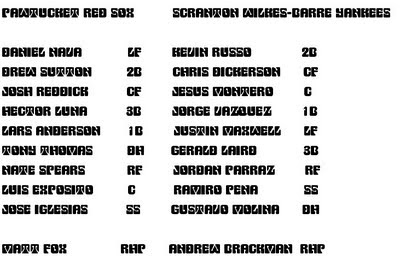 Let it be noted that the font I used for the lineups is super ugly, but I don't have time to select a cuter one.

Pawtucket WINS! 4-1. Red Sox starter Matt Fox pitches five scoreless innings with one walk and three strikeouts. Fox's last appearance was as a reliever, so his pitch count was a lowish 57. Yankees starter Andrew Brackman's appearance was unruly and unkempt - It took him 96 pitches to get through four innings. Brackman gave up three runs on six hits and five walks.

Brackman's first sign of trouble came in the first inning, when unending source of doubles Drew Sutton uh, doubled to right with one out. A walk from Reddick put two runners on for Mash Monster Hector Luna, who hit an RBI single to center, putting Pawtucket up 1-0. After a strikeout by Lars Anderson, Luna stole second with Tony Thomas at the plate. Laugh if you like, but Luna stole seven bases last year, which is more than I can say for Brandon Moss.

Thomas walked to load the bases for Nate Spears... And it's a line drive to right! Reddick scores! Here comes Hector Luna and the throw is.... Not in time! A two-run single for Nate Spears! (TM Every baseball radiocaster that ever lived.)

All of that junk put the PawSox up 3-0. No one scored further until the top of the sixth. Yankees reliever Luis Ayala faced Nava to lead the inning off, and Nava tripled and scored on a sac fly by Reddick.

And still the Yankees did not score. Not off Tony Pena, not off Blake Maxwell. It was Michael Bowden in the ninth inning that got nicked for a Scranton run. Things got a little sweaty and intense when catcher Jesus Montero led the ninth off with a single... And then Jorge Vazquez singled... But Bowden got left fielder Justin Maxwell with a K and Brandon Laird with a force out. Jordan Parraz followed with a single to right, scoring Jesus Montero. 4-1 Pawtucket. Bowden throws a wild pitch... Everyone advances... But he managed to strike out Luis Nunez to sustain the lead and put up a win. Yeah, you like that.

now you know how nice it feels:
1. Hector Luna went 3-5. He is a freaking animal. Nate Spears also had three hits. Luis Exposito went 0-5 with a strikeout.
2. This season, 11 out of 15 runs that Andrew Brackman has given up were in the first inning.
3. Ramiro Pena was pulled out of the game to go up! Up! To the Yankees to replace Eric Chavez, who is evidently made of porcelain.
4. "It’s comical that teams still run on the Yankees outfielders. Laughable. Justin Maxwell just got Drew Sutton at the plate, and it wasn’t even close. I understand you have to take chances sometimes, but the opposition is gambling foolishly against the Yankees outfielders. Any time they have a play, they make it." - Geez, smug much? From a live blog featuring the inimitable Donnie Collins.
5. "Here’s a strange little tidbit on a night full of strange tidbits: Right-hander Kyle Weiland is warming up in the Pawtucket bullpen. Tomorrow’s scheduled starter for Pawtucket: Kyle Weiland." - ibid.
6. "And evidently, Blake Maxwell is a character. He’s got mutton chops and an Al Hrabosky — I seriously don’t know how to spell that — mustache. His first pitch went to the screen. His second hit Russo. He’s stomping around the mound like Rojo Johnson. Hysterical." - ibid. Okay, just read the whole thing. Someone buy me a laptop so I can do this in Pawtucket.
7. Oh yeah, Blake Maxwell was called up from Portland. Rich Hill, Atchison, and Aceves are all with Boston. Tony Pena's off the DL.

Tonight! Kyle Weiland faces David Phelps. Oh my gosh, they both went to Notre Dame. This is exciting for someone, somewhere.