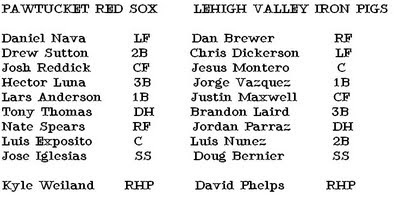 Yankees win 10-1, damn it. Starter David Phelps pitched six shutout innings, giving up one hit and one walk. Phelps had seven strike outs, so I guess you gotta tip your cap. Pawtucket starter Kyle Weiland also has seven strikeouts, but he gave up five runs in five and a third innings and took the loss.

Scranton Wilkes-Barre struck first in inning number one, when left fielder Chis Dickerson hit an RBI double. 1-0 Yankees. In the third inning, a slew of singles and a timely double put SWB up 3-0.

The sixth inning saw Scranton surging ahead of the PawSox for good. First base power threat Jorge Vazquez led the inning off with a walk. A line drive to center by Brandon Laird put runners on first and second and ended the night for starter Kyle Weiland. Enter good ol' Clevelan Santeliz! Santeliz got Jordan Parraz to fly out for the second out of the inning, but he then walked Luis Nunez to load the bases. And that's when little Doug Bernier tripled to right, scoring Vazquez, Laird, and Nunez. That's some excitement right there at (Name of ugly Yankees park in Moosic).

Jason Rice entered the seventh inning, inheriting a pair of runners from Santeliz. Freaking Jordan Parraz hit a three-run double. What is with this guy?

The only Pawtucket run came at the final hour in the ninth, when Nate Spears hit an RBI single. Isn't he that guy that you like that did that thing in spring training?

Jesus, that was hard. I very nearly went back to bed. And I probably should have, but I don't think I'll be here tomorrow. I would never deprive you guys like that.

YEAH, PAWTUCKET, HOW DO YOU LIKE THAT? HUH? YEAH, YOU LIKE THAT?
1. "Now that they're both married and getting on with their careers, it's difficult for David Phelps and Kyle Weiland to get together as much as they'd like. They chat from time to time, of course, and every once in a while, they run into each other at the office." - from Donnie Collins' game summary. Collins is streets ahead.
2. “Today, my mechanics were clicking. I was making pitches. It was definitely my best stuff. When we’re clicking, there’s not a lot of teams that can beat us.” - Well, well, David Phelps. How big, exactly, is your penis?(story here)
3. Lars Anderson tried, man. He had a couple of hits. No one player hit more than a single, so I suppose that makes Anderson the star of the game.
4. "Between innings, super intern Colin noticed the Pawtucket pitchers behind the plate charting pitches were doing so with an iPad. So I got out my binoculars, and sure enough, there was my old Red Barons buddy Brandon Duckworth using a stylus to click on pitch type, location and speed. That, my friends, is an awesome scouting tool the Red Sox have." - Donnie Collins' live blog.
5. Right fielder Dan Brewer is a recent call-up from double-A Trenton.
6. Wait, so Jordan Parraz was on the Red Sox? Yes, and then he was claimed off waivers by the Yankees. Possessions are fleeting.

TODAY! North Carolina whores Andrew Miller and Adam Warren face off at the park... I saw that park from a service station I'd stopped at in Pennsylvania. Remember? I went to Pittsburgh to see the Pirates? No? You never listen to me.
Posted by Jenks at 6:54 AM