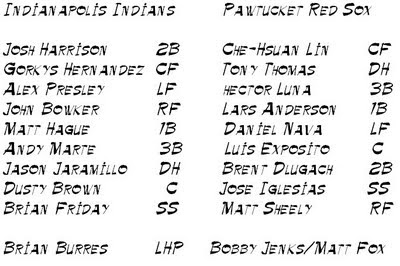 Andy Marte WINS! With a grand slam in the ninth inning off reliever Michael Bowden. 6-3 Indians. Hold it together, Grandma.

Bobby Jenks is rehabilitating and he pitched the first inning of this game, but it didn't really count. In fact, this whole game is a sham so let's strike it from the record books! Andy Marte, I'm sure you don't mind, do you?

Jenks gave up a single to left fielder Alex Presley and that was probably the most exciting thing that happened. Oh, he struck out John Bowker. Is Bowker still like, a guy? Or is he fading tail lights?

Matt Fox pitched the meaty inner thighs of this game, going six innings and giving up one run, a solo homer in the fourth from that bratty Alex Presley. Shut up, Alex. Pawtucket was ahead by that point anyway, having scored a pair of runs off Indians starter Brian Burres. Yes, that would be the back-to-back doubles by Nava and Dlugach (ooooh, unlikely!) and the RBI single by Iglesias.

The Red Sox clumped on another run like bad mascara in the seventh inning, when the ever-slumping Daniel Nava hit his second double of the night. Nava scooted over to third on a groundout by Dlugach. Iglesias singled, pow. 3-1 Pawtucket.

Hideki Okajima! Is back in Pawtucket! Okajima pitched a scoreless eighth, maintaining his svelte 0.00 ERA in the IL. So that was good. Michael Bowden pitched like he was drunk, though, and do you really feel like reliving it? Single, single, stolen base, walk, sac, something something grand slam. Put like Gorkys Hernandez in there, but ultimately blame Andy Marte. I know there's a lot of hurt built up, especially if you were traumatized by Edgar Rentaria. It's okay, let it all out...

Pawtucket was stunned into silence, and Indianapolis reliever and man of anonymity Tim Wood struck out Nava, Exposito and Dlugach in the bottom of the ninth. In order. Where's your messiah now?

Bowden has pushed a button, talks in past and not present tense:
1. I can't rip on Bowden too badly for the the grand slam. Shit happens. The Pirates triple-A team has always been formidable. Not only that, but I am much sweeter than I used to be. If that's even possible.
2. Hector Luna also went 2-4. Luna's a real bad ass, so let's try not to overlook his contributions.
3. For Indianapolis, Alex Presley and Gorkys Hernandez both went 3-4. Hernandez tripled in the sixth.
4. This game summary was written by a robot. Aren't you glad I don't write like that?
5. Matt Fox "carried the mail" for the PawSox? Come. On.
6. Alex Presley's rise to the majors is being stymied by Xavier Paul. What's with the weird photo accompanying this story? Anyway, Presley was IL Player of the Month in April.
7. Alex Presley was/is leading the IL in hits. Pirates fans almost universally want him called up. Here, watch this video of him in action. (NSFW)
8. Brian McPherson explores Che-Hsuan Lin. When McPherson dies in a Paris bathtub, I will honor and respect his memory by spray painting his gravestone and leaving behind bottlecaps and roaches.
9. Pat Lackey contemplates the sad career of Andy Marte. Oh, look what you've done! Now I'm crying!
10. John Lembo on Alex Presley and the vagaries of success.
11. A Pirates blog called 'Forever Rebuilding'? Great, great name. Anyway, more on Presley.

Oh my god, I am so good at this. How am I not getting paid? I should go on strike! YEAH!

Tonight! Justin Wilson, Kyle Weiland. Sorry, I can't make it. Maybe Sunday I'll try and squeeze myself into the park, even though I hate those crowded weekend games.