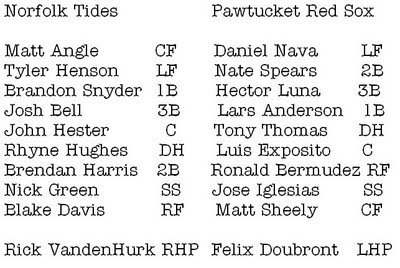 Or should we say, "Get me Ryan Kalish"! Pawtucket loses 5-4 in 13 innings. Clevelan Santeliz takes the loss, blowing it in the 13th.

Your Pawtucket starting pitcher was big Felix Doubront, who's slick enough to walk the concourse without being noticed. Yes. It's wonderful to see him. It's certainly a thrill. Doubront pitched 3 1/3 scoreless innings, giving up one hit and two walks. Doubront struck out five Norfolkians, threw 47 pitches. Twenty-nine were strikes. Sounds good to me.

VandenHurk suppressed Pawtucket's offense rather well until the fifth inning, when a crop of singles led to Luis Exposito crossing home for the first run. In the sixth, Hector Luna led off with a walk and Lars Anderson tripled to center. Hector Luna didn't go home, though, because he was floored by the majesty of Anderson's first 2011 triple and stopped dead in his tracks.

No, of course not! Luna scored. But on the flip saide of all of this, at the innings' tops, Tony Pena was pitching and not necessarily preventing Norfolk runs. So it was 3-2 because Pena gave up a home run immediately after replacing Doubront AND Pena allowed a couple more runs in the sixth.

Is everybody getting this?

Norfolk scored their fourth run in the seventh inning, when second baseman Brandon Snyder hit a line drive RBI single to center. Who was on base at the time? Nick Green? Same guy? yeah, it's him.

Pawtucket picked up another run of their own in the seventh, facing reliever Troy Patton. With one out, Matt Sheely bunted and advanced to second when Nava walked. Patton got Nate Spears to pop up, but he was immediately replaced by super tall Pat Egan, who had the unappealing task of facing HECTOR LUNA! Luna hit an RBI single and it was 4-3 Tides.

Pawtucket tied the game up at last in the ninth inning. Good old Armando gabino was pitching for Norfolk and he led the ninth off by walking Sheely. Sheely was picked off, but Gabino walked Nava. Che-Hsuan Lin entered as a pinch runner. WHY AM I NEVER AT GAMES LIKE THIS? Wait, someone walked. Tony Thomas? No, it was Nate Spears. Come on, Luna! Except Luna lined out.

Anderson! Line drive single to right! Lin ran home from second and it must have been fantastic! TIE GAME!!

Stayed tied til the 13th. Clevelan Santeliz surrendered a solo home run to Brandon Snyder and that was it. Tough loss, really.

Hector Luna is a stranger in an open car:
1. If Boston hadn't have ganked Reddick, Pawtucket woulda won this ish. Even Drew Sutton would have helped.
2. Wow. In 13 innings, only Anderson got an extra base hit. RYAN KALISH, ARE YOU CLOSE? Anderson went 3-6 and he wants to be called up soooo bad. Someone should prank like, Arnie Beyeler. "Yo, Arn... Anderson out of the lineup. We'll touch base with you a little later."
3. That's not funny.
4. Tommy Hottovy and Blake Maxwell also pitched. Maxwell went 3 1/3 scoreless, so please reward him with sexual favors.
5. High school superstar Kevin Pereira breaks it all down. You should read that and not this, to be honest.
6. Josh Rupe got the win for the Tides.
7. "Single Leg Squat and overhead Squat assessments showed that [Rick] VandenHurk had multiple imbalances – thought to contribute to the compromised performance. Corrective Exercise – leveraging the NASM prescription of Inhibiting and Lengthening overactive muscles, Activating the weak antagonist and then finally- integrating exercises that had transference to pitching performance proved to make the difference." - In case you were concerned about VandenHurk's hernia and subsequent recovery. And future injury potential. (source)

Tonight! John Lackey versus some Orioles lefty. Game starts early because of the hockey game. Six instead of seven I think. I don't know, fuck off! There's an official website that sucks for this information. I'm just here to juggle and throw pies at Luis Exposito.
Posted by Jenks at 11:07 AM