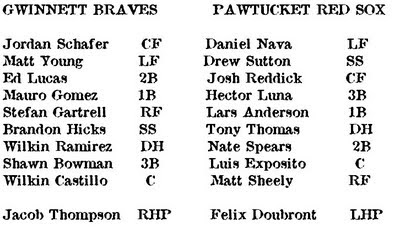 Gwinnett starter Jacob Thompson only pitched 1/3 of an inning. In the first inning, Thompson kicked things off by giving up three consecutive walks to load the bases. And it wasn't like, a criminal mastermind thing. Hector Luna then singled to get the first run across... And then Thompson walked in the second run. So far, so good. Tony Thomas was up next and he hit a line drive double to left, scoring another pair of runs. Here comes Nate Spears! Spears is generally pretty productive, but somehow he grounded out. But that's okay, it got another run over.

Thompson's next obstacle was Luis Exposito, the easiest out in town. Plunk, he hits him, pushing another run over. And that was it, no one could stand any more, it was getting uncomfortable for everyone involved. Kind of like the pitching version of whiskey dick.

Lefty reliever Jose Lugo entered the game to try and scrape up some dignity. Lugo struck out Sheely and Nava to end the inning, but it was 5-0.

Pawtucket scored a sixth run in the bottom of the second when Drew Sutton hit a solo homer. The team didn't score again until the sixth inning, when reliever Jaye Chapman stepped in for Lugo. Drew Sutton homered a second time with Matt Sheely on base, Josh Reddick hit a double, Luna and Anderson walked, and Tony Thomas lined into a force out, scoring Reddick. That's three more runs, to put it succinctly.

Scott Atchison was nicked for a run in the eighth inning, when Stefan Gartrell hit an RBI double, But that was all. Clevelan Santeliz pitched the ninth inning and somehow managed not to give up seven or more runs.

And now I will never forget Jacob Thompson.

Keith:
1. Drew Sutton, you guys. 3-4 with three RBIs. So unassuming, but such a solid player thus far. All that RBI-ness really brings out his eyes, too. What I am trying to say is that you totally want to wake up in his jersey.
2. Braves first baseman Mauro Gomez went 3-4. Catcher Wilkin Castillo hit a triple off Jason Rice.
3. Mike Scandura's gonna tell you all about it.
4. This brief game summary contains three misspellings. Pawtuckett. Mat Fox. Muaro. Super job, "Staff Reports", if that is your real name.
5. I like how this report leads off with a little file photo of Drew Sutton. I don't know, it cracked me up for some reason.
6. Nice job, Kevin Pereira.
7. Series preview here, it's very lovely.
8. And this story is only tangentially related, but it features Jacob Thompson and I think it's terrific. Adam Sobsey!!!!

Tonight! Lefty Mike Minor will try and take down Mighty Matt Fox. I really ramped myself up for this game, so I will be in attendance, barring catastrophe. DO IT.
Posted by Jenks at 6:51 AM