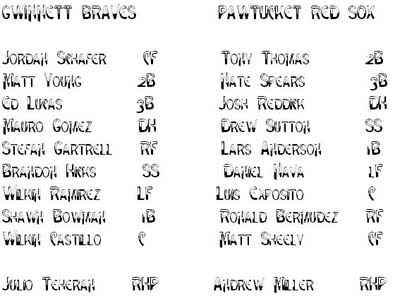 Not really, but I was there for a little while. Pawtucket starter Andrew Miller pitched five innings and gave up two runs, one of them unearned. Miller struck out six and walked four.

The Braves countered with their own brand of sweetness: Superstar and (purported) Future Pedro Julio Teheran. Teheran threw 120 pitches, you guys, all the way into the eighth inning. Seven strikeouts, four walks, two runs.

Pawtucket scored first in this game in the bottom of the second. Drew Sutton led off with a single, Lars Anderson walked. No outs. And then Daniel Nava hit an RBI single and yes you are reading that correctly. Nava has not been doing much of anything at the plate, but yesterday he was feeling good. Luis Exposito then flied out to center. Anderson tagged, ran home, 2-0 Red Sox.

Gwinnett got one back in the top of the fifth, when left fielder Wilkin Ramirez hit a solo home run. Reliever Scott Atchison took over for Miller in the sixth inning and Jordan Schafer was dancing around first base, having reached on an error. Matt Young singled to put two runners on with no outs. Third baseman Ed Lucas bunted the runners over... Have we seen many Pawtucket bunts this season? Who bunts? Nate Spears? Tony T? (Eighteen bunts for the Pawsox thus far. Reddick and Thomas lead the team with three apiece.)

Atchison then threw a wild pitch which Schafer was able to score on, tying the game. Whatever, it was only the sixth. Except the game stayed tied for inning after inning... Guys like Anthony Varvaro, Dan Wheeler, and one of the Proctors pitched. I'm pretty sure Derek Lowe was in there for a while, too.

In the bottom of the tenth, Pawtucket did load the bases up with one out, but Varvaro struck out Reddick and Sutton. Happened again in the 14th, but Reddick popped out and Sutton flied out. Come on, you guys. Come. On.

Blake Maxwell was pitching in the 15th when Stefan Gartrell hit a two-run homer. I would venture to say this made Gartrell very popular with his teammates. That was the end of it all, Pawtucket didn't score in the bottom of the inning. The Braves maybe missed their flight. What a sad ending.

two things:
1. Daniel Nava went 3-7.
2. Lars Anderson, your game is tight. I like his style of play this year, although I'm sure he's frustrated by the results. It is all going to fall into place, according to the mysterious floating hamster in my dream.
3. Take it away, Terry Nau.
4. Michael Bowden pitched a couple of scoreless innings. I'm starting to think his effectiveness is not a fluke. Jason Rice? Three scoreless innings. Good work, everybody.

Sorry this is so late, but everything was malfunctioning.
Posted by Jenks at 9:20 PM