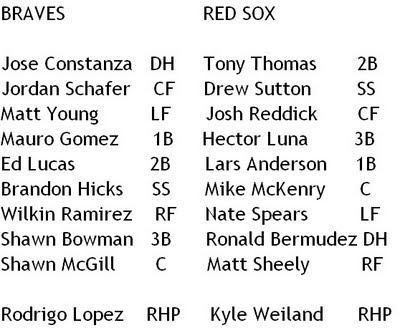 Fresh and clean reliever Dennis Neuman handled the final three innings of the game remarkably, keeping the Braves hitless and striking out three of 'em. Too bad.

Lars Anderson hit a double at some point and Nate Spears tripled. What can I say? This game was all pitching, all Rodrigo, all day.

hiawatha didn't bother too much:
1. Jordan Schafer's been suspended for PED use in the past. He denies.... things. Blames hanging out with a fast crowd. Sure, but he totally looks like a guy in high school you'd buy weed from, kinda knowing he's taken a big pinch off it.
2. "Anoche, el veterano Rodrigo López volvió a demostrar que está arriba del nivel de la Liga Internacional de Triple A, al lanzar siete entradas sin aceptar carrera en una victoria 2-0 de Gwinnett, sucursal de los Bravos de Atlanta, sobre Pawtuckett." - It's PAWTUCKET MOTHERFUCKER!
3. Rodrigo Lopez is 5-0 so far this season. He is currently leading the IL for innings pitched with 45.1.
4. "Rodrigo Lopez is 35, and he has exactly 0.3 rWAR since the beginning of the 2005 season. He’s the definition of a replacement player. (He actually has 6.4 fWAR over that period, which strikes me as faintly absurd, but it amounts to effectively the same thing — for the past six years, he’s been worth between 0 and 1 Win Above Replacement. We have him in our minor leagues, just like every team has a guy like that in their minor leagues in case the whole staff catches the flu and they need someone to make a spot start. He doesn’t have trade value." - posted by 'Alex Remington (Another Alex R.)' on some Fredi Gonzalez Hate Site

TONIGHT! Julio Teheran, for all you thrill-seekers. The Braves seem pretty stacked as far as young pitching, so I hoped you're enjoying this series of tassle-flappin' starts at McCoy. Even if Pawtucket is losing.

Andrew Miller and his coiffure will attempt to get a win. How bad do I wanna skip work today?
Posted by Jenks at 7:14 AM