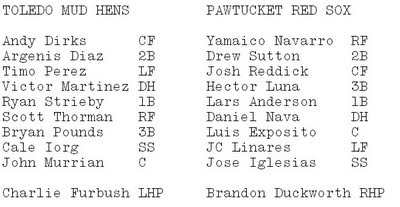 I CAN NO LONGER KEEP WAKING UP THIS EARLY! I can't do it, I can't. I was having a perfectly good dream that I was reading an in-depth profile on Jim Leyland after I skateboarded to my law class. And in my dream I lived near the beach. Which I already do, sort of, but it's not like I can see the ocean from my house.

Let me get two things out of the way: HEY MCCOY P.A. GUY, IT'S 'LUIS' EXPOSITO! NOT 'LOUIS'! IT IS NOT THE SAME THING! I WANT JIM MARTIN BACK!

Second, Helen Glover threw out the first pitch. Glover spit some 'Proud to be an American' crap and told a stupid 'joke' about Bin Laden. It wasn't wildly conservative, but the undertones were there. And they played 'Male Model'. (Sorry.)

Yeah, it's way too early. This sleep deprivation is going to make me crash my car.

Pawtucket WINS! 11-2. Starting pitcher Brandon Duckworth was not stellar, but solid enough to keep the Dirt Birds down for six innings. Duckworth gave up two runs on eight hits and he struck out six batters. And two walks, don't forget those.

Toledo starter Charlie Furbush, who comes from the rather frightening state of Maine, is tall. And it was obvious from the outset that Furbush could not handle the real ultimate power of Yamaico Navarro, who led the entire game off with a double. Navarro advanced on a passed ball, Sutton walked, Reddick grounds into a force out, scoring Navarro. And then Hector Luna... Good news, everyone! Luna hit a home run! 3-0 Pawtucket!

The second inning was great but also terrible. JC Linares led off with a walk... Iglesias then hit the ball into the infield and reached first base on an error. But when Linares hit second base, he hurt himself and dropped to the ground. Big, strong Linares was down and he was all red and practically screaming in agony. It looked really bad. Probably the knee. Linares was assisted off the field by two gents and he hop hopped all the way to the dugout. I thought he might have needed a stretcher. At any rate, it was the worst thing I have ever seen at McCoy. Linares is great, too.

Nate Spears in his gator boots and his pimped out Gucci suit entered the game as a pinch runner for Linares. Poor Linares, oh my god, I hope he is okay. After all of that, Drew Sutton hit a three-run homer. Reddick flew out to center, but Hector Luna hit another BOMB and it was crazy. Damn it is good to have Luna on our team. He is like Super Sandy Madera. 7-0 Pawtucket! And it was curtians for Charlie Furbush, who was replaced in favor of Chris Oxspring. It was a very long second inning.

Pawtucket struck again in the third v Oxspring, after Toledo scarped up a run in the top of the inning. Iglesias hit a single with two outs and Yamaico Navarro hit a home run to center. 9-1 Pawtucket!

Top of the fourth, shortstop Cale Iorg doubled with one out. Center fielder Andy Dirks hit an RBI single to bring the score to 9-2. But in the bottom of the inning, a slew of singles pushed another run across and it was 10-2 Red Sox.

Pawtucket went on to score its eleventh and final run in the fifth inning, when Yamaico Navarro hit a solo home run. Truly astounding. I was unstirred by Navarro last season and now I am shaken.

Relievers Randy Williams and Matt Fox stapled down the rest of the game, held the Mud Hens to zero point zero zero runs. It was wonderful to be there. It was certainly a thrill.


isaac fucking newton:
1. Cale Iorg is a pretty ballsy infielder. Jose Iglesias certainly noticed. It almost looked like they were trying to outdo each other at shortstop, both flying after balls that were nowhere near them. Good hustle, I guess?
2. Toledo third baseman Bryan Pounds is ripped up. He must work out a lot. Also, Scott Thorman gave a ball to a kid on the field for a pre-game ceremony, which was so sweet and unnecessary. The youngster looked at it for second then unexpectedly threw it... Hey...
3. Matt Sheely is still just hanging out. He is this season's version of Jeff Natale.
4. Furbush's had some friends and family came down from Maine. I'll bet they packed up the wagon and played their banjos the whole way down! And I'm sure they were disappointed when they couldn't bring their shotguns into the park.
5. When Luis Exposito hit his RBI single in the fourth, he raised his arms up triumphantly while standing on base. WHAT. Is that some kind of signal of camaraderie or is Exposito just being a total dick? Either way, teams have my permission to plunk him.
6. The bases were loaded for Duckworth in the first inning with one out... But he got Strieby and Thorman to strike out. MACHO.
7. Andy Dirks is the IL Player of the Week.
8. And don't feel too bad for Furbush: He recently pitched a complete game one-hitter. He was later seen celebrating by drinking out of a big, brown jug with three x's written on the side.
9. There are two Australian pitchers on the Mud Hens. And now you can read this very nice indeed blog about Australian baseball players called 'Oz MLB Players'.

Listen. Day game today featuring Duane Below and Felix Doubront. Then an off day and THEN THE FUCKING YANKEES!!! Let's wreck those assholes.
Posted by Jenks at 6:32 AM