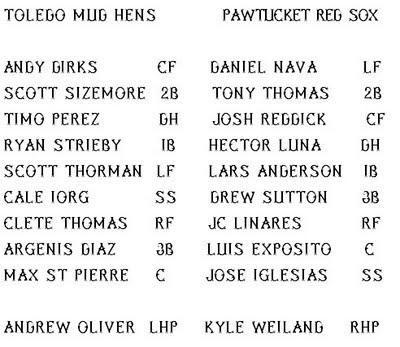 Fireworks last night in Pawtucket! Not the way you're thinking... I'm talking about non-figurative fireworks after the game. Didn't mean to rile you up.

PAWTUCKET! LOST! 4-3. Starting pitcher Kyle Weiland pitched five innings, gave up two runs and got the loss. Weiland is now 2-2 for the season. But get this! Toledo's starter Andrew Oliver pitched seven innings and threw 111 pitches! Oliver is only 23 years old, too. Remarkable. Oliver picked up the win, so his labor was rewarded and everyone loves him.

Runs! First run of the game was in the fourth inning. Second baseman Scott Sizemore singled and advanced to second on a balk. Timo Perez bunted Sizemore over and first baseman Ryan Strieby singled to get the run across. People helping people, that's what it's about.

A trio of Toledo singles in the fifth inning put the Mud Hens up 2-0. Jason Rice pitched the sixth and seventh and held Toledo down, face first in the sewage after all the bars were closed, and grimaced as they choked on the sludge, their cries for help echoing off the brick buildings downtown... But then enter Randy Williams. And his mustache. Williams is back! He's off the DL and I am so excited. Wait, didn't I see Williams in the bullpen during a game? I think that's against the rules. I'd like to speak to a manager, please.

Okay, Randy Williams. Williams gave up two runs. It was the eighth inning and Sizemore led off with a double. Timo Perez sac bunted and still made it to first, thanks to an error by Drew Sutton. Thanks a lot, DREW. Thorman grounded into a force, Perez out at second, Sizemore scores. Thorman stole second base... Wait, isn't this the same guy who was in the Braves org? Big Canadian lummox? Am I thinking of someone else? Thorman stealing bases? THOR-MAN NOT RESTRAINED BY BULK! THOR-MAN STEAL BASE AGAINST PUNY PAWSOX!

Shortstop Cale Iorg hit a liner to center and Thorman scored. Iorg went on to steal second, but was sort of academic because the inning end just as things were getting exciting. Clete Thomas grounded out. But damn, this is the little team that could, with all the bunting and stealing and running around advancing behavior.

Pawtucket picked up three runs in the bottom of the eighth. Robbie Weinhardt was pitching, could not seem to get an out, and was hastily replaced by Matt Hoffman. Is he one of the pedigreed Hoffmans of renowned relief? The world may never know.

Hoffman also ran into trouble and was replaced by former PawSox great Enrique Gonzalez. Gonzalez pitched the rest of the inning and mowed the Red Sox down in the ninth. According to the radiocast, his pitch speed was showing at 97, which made me laugh and laugh. There is just no way. Regardless, game over. Toledo was freaking playing to win, you guys. I wish Pawtucket were like that.

I'll keep my remarks brief:
1. "Matt HOFFMAN? I saw him pitch in Toledo, was rocked.. Absolutely rocked.. Threw like a girl and only hit 85 MPH. Seems like he's on steroids. He blew it in Erie, was terrible at Toledo, and is not nowhere near a top 20 prospect. So what makes you think he'll be in the Tigers bullpen? One outing? 0% and you can mark it down, haha." - posted by 'TurnerHasHYPE' on the Tigers forum.
2. Toledo is second in the IL for stolen bases. Pawtucket? 11th place. Toledo's also in second for sacrifice bunts. Pawtucket is in dead last.
3. Series preview! Assholes are trying to steal my job!
4. Cool story on Mud Hens mgr Phil Nevin.

This afternoon! Andrew Miller v Thad Weber. Go out, have fun. I'll just be over here sneezing my goddamn head off.