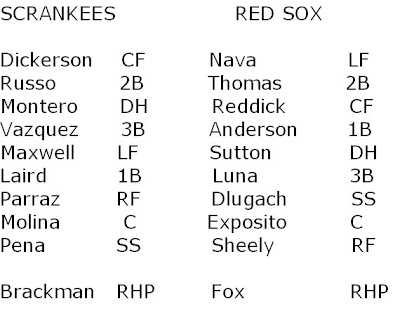 Pawtucket wins 9-3 on SWD. Fascinating starter Matt Fox pitched five innings that weren't too cute, as three walks and four hits led to three runs, including a solo homer by left fielder Justin Maxwell. Fox got the win, bringing his record to 4-2.

Yankees starter Andrew Brackman gave up seven runs in four innings. Thank you, Thing! Brackman was first attacked in the first inning, when he got things going by walking Daniel Nava. Nava's second on the team for walks, so there you have it. Nava stole second, advanced to third on a fly ball to right, and scored the first run when Anderson singled. And who is leading the team in walks? Lars Anderson!

The Red Sox led off the second inning with a pair of singles and a sac bunt by Matt Sheely. Which is crazy, since the PawSox do not bunt. They are last in the IL with a paltry four bunts. But Sheely bunted and Brackman was evidently flabbergasted, because he made a fielding error and Dlugach scored. Matt Sheely wound up on second base. Fantastic stealth attack!

Later that inning, a groundout by Daniel Nava got Exposito across to make it 3-1 Pawtucket. Scranton scored a second run in the top of the third, and Pawtucket answered back with a run of their own. Anderson walked, Exposito drove him in. POW, like that.

What else did Nava do? Lead off the sixth with a single? Yes, and Reddick singled, too. Drew Sutton was all over it, hitting a fly ball single to center, scoring both Nava and Reddick. I love how Pawtucket scored nine runs with only one extra base hit. MICROBALL!!!

Relievers Rice, Atchison, and Bowden kept the Yankees offense to one hit and did not walk a soul. I'm completely torn up that I missed this game, it seems really neat. I'm overwhelmed by rumors this high and overcome by lows. And not just because it was Star Wars Day. Was Darth Maul there? That guy's a FREAK!

apathy's crown:
1. Daniel Nava went 2-4 with a walk, an RBI, and a stolen base. Drew Sutton went 3-4 with four RBI. Luis Exposito also went 3-4.
2. You might say the Yankees were outFOXed. You might, but I never would because I'm not a sports hack who hates their life. Those guys must really envy my free-wheeling, unpaid ways!
3. Sean S. slaps a 'Pawtuckett' in his headline, then spells it correctly for the article. Am I the only person who holds themselves to any standards? (Expositio? Come on.)
4. Here, read this thing that Marc Normandin wrote. It's funny and cool, like Frank's Depression Poetry.
5. Is it the cutter, Michael Bowden? That's the word on the street.

Tonight! Kyle Weiland and the sinister David Phelps. I am going to try to go, but it doesn't look good. These 6 o'clock games are killing me!
Posted by Jenks at 6:54 AM