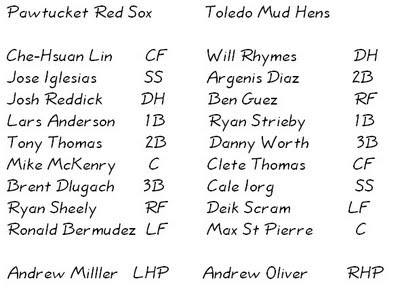 Pawtucket WINS! 3-2. Starting pitcher Andrew Miller went five innings and gave up two runs on six hits. He walked four and struck out four. Miller also picked off Argenis Diaz, who had kind of a crappy day overall. The win went to the incredible, edible Mike Bowden, though, and I will tell you more about that later.

Toledo's starter was Andrew Oliver. Oliver only pitched two innings and left the game with a 2-0 lead. I can't say why his start was just two innings, but I know he's going up to Detroit so just think about that.

But can we get back to Andrew Miller? Miller led his stint off by getting Will Rhymes to line out, but Argenis Diaz followed that up with a ground ball single to left. Diaz was then both picked off AND caught stealing in the same play. I AM JUST TELLING YOU WHAT THE OFFICIAL SCOREBOARD SAYS. Ben Guez was batting at the time and he was either bewildered and dumbfounded or he didn't notice. Or he noticed and his face was a perfect mask of ennui and serenity. Hard to tell with Ben Guez. And as is usually the case, no one made eye contact with Diaz as he made his way to the dugout. I guess, I wasn't there. OMG SUNFLOWER SEEDS IN A GIANT PAIL!!!ONE!!1

The point is that Miller walked Ben Guez and Ryan Strieby hit an RBI double so it was 1-0 Mud Hens. Toledo scored its second run in the second inning, thanks to a double and another double which equals one run unless you're an idiot. Or what if you have a really bad injury? Or what if you're Jeff Suppan? Ooooh, too soon?

Matt Sheely led of the top of the third with a triple, his second of the year. Jeff Natale's career triples in Pawtucket? TWO. Bam, same guy. Matt Sheely's first Pawtucket game was in 2007. I am uncertain of Sheely's significance or purpose. I don't feel as though we know enough about him. Much like hambone, he is an enigma.

Ronald Bermudez doubled with Sheely on third, but Sheely just stood there, frozen... Not really, a run scored. 2-1. Che-Hsuan Lin hit a line drive single to left, which was the end of the night for Andy Oliver. Reliever Brayan Villareal grabbed hold of the reins, getting the outs to end the whole mess. Good evening, Brayan!

Pawtucket tied the game in the sixth inning with Matt Hoffman on the mound. Lin singled softly, slowly to left. Iglesias reached on a Diaz error. A sac fly to center by Reddick scored Lin and it was even Steven.

Toledo threatened in the bottom of the sixth with Jason Rice pitching. Cale Iorg, double! Diek Scram, walk! Nobody out! Sac bunt by catcher Max St Pierre! Rice intentionally walked Will Rhymes, which is kind of cute. Yeah, you don't wanna face Rhymes in this situation. Oh... Sarcasm suspended. Rhymes is hitting .455 with runners in scoring position. My bad!

Know what? Rice got out of the inning. The Mud Hens evidently blew it... See also, the ninth inning. Bowden pitching, walks third baseman Danny Worth with two outs. Worth tried to make it home on a Clete Thomas double, but yeah, out. Toledo wound up leaving fifteen players on base.

Extra innings! Pitching at the top of the tenth, Lester Oliveros. First batter he faces is Iglesias, who hit a double. Josh Reddick pulled a single to right out of his little athletic cup to put runners on first and third. Uh-oh, Lars Anderson. How about an intentional walk, Anderson? I would imagine intentional walks are flattering and make you feel like a real badass.

Tony Thomas. Bases loaded with no outs. Thomas grounds to third. Worth throws to sub catcher Omir Santos to get Iglesias out. Reddick's still going. Santos makes a throwing error, Reddick scores, Thomas actually makes it to first. Yes, that makes perfect sense and I have no problem visualizing what happened.

That was it, Pawtucket won. Bowden pitched the tenth and gave up a couple of hits but nothing too crazy happened. Thank you for dialing in and have a wonderful day.

regarding hennery:
1. Matt Sheely went 3-5, probably trying to impress people. Lars Anderson had three RBI. I know what people say about Anderson but I am here to tell you that he has grown on me and I have been converted into a fan. Funny how that happens.
2. Tony Thomas: 0-5 with two K's.
3. Will Rhymes went 3-5 with a double, a walk, and one RBI. Rhymes was one of five M. Hens to double yesterday.
4. This game was 3.5 hrs long. Ten thousand fans were there, mostly schoolkids I would think. It was a 10:30 game. That's so, so early. My heart goes out to all the Red Sox and Mud Hens and miscellaneous staff members. Even Art Thigpen, that crazy bastard.
5. Andy Alfred talks about the weekend series, says he'll boo Mike Hessman when he returns to Toledo. HOW DARE YOU!!!? HESSMANIA!!!!!
6. John Wagner elucidates the play in the tenth: "[A] throw to first by catcher Omir Santos was too close to the runner and Ryan Strieby couldn’t catch it. Instead it rolled past him, allowing Reddick to score the game-winning run from second." That was as satisfying as a good back itch or a hot beer on a cold day.
7. Mud Hens reliever Brendan Wise pitched three innings. I didn't forget you, sweetheart.

Off day today! TOMORROW! INDIANAPOLIS INDIANS! Darn it, I cannot go. Check it out for me?
Posted by Jenks at 2:55 PM