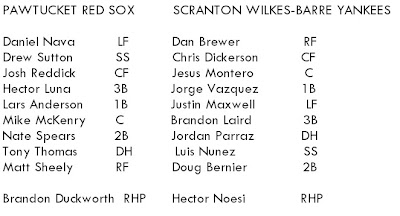 PawSox win 5-4. Starting pitcher Brandon Duckworth gets the win, getting in six innings while throwing 94 pitches. Duckworth gave up four runs on eight hits, including a solo home run by outfielder Justin Maxwell.

Yankees starter Hector Noesi pitched seven innings and took the loss. Pawtucket scored all of their runs off Noesi.

Pawtucket's first run of the night went down in the first inning, when Drew Sutton hit his twelfth double of the year and was subsequently brought home by a Reddick single to right. Scranton tied it up 1-1 in the second inning, when a slew of singles pushed Justin Maxwell across.

Pawtucket pulled ahead in the fourth inning when, with two outs, Lars Anderson doubled on a fly ball to center. Catcher Mike McKenry walked and both runners advanced on a wild pitch. And Nate Spears, who's been great, hit a line drive single to right, scoring Anderson and McKenry. Unfortunately, Spears thought he had second base. He did not. DID YOU NOT READ THAT THING THAT DONNIE COLLINS SAID? The SWB Yankees have some strong, strong outfielders. Spears was out at second base.

Scranton kept pace with Pawtucket to a certain extent. In the bottom half of that fourth inning, Maxwell hit the aforementioned home run. And in the fifth inning, they pulled ahead 4-3 when center fielder Chris Dickerson hit a two-run double. Pawtucket tied it up in the sixth with... A bunch of ground outs? Whatever, it scored a run.

And finally, Pawtucket's little Matt Sheely led the seventh off by getting hit with a pitch. After stealing second, Sheely made it home when Daniel Nava hit a single. Wow, Sheely really is the same guy as Jeff Natale!

And that was it. The run in the seventh put the Red Sox ahead for good. Fresh, young call-up Dennis Neuman held Scranton down in the eighth and ninth and got the save. Nice work, kid.

vermountains:
1. Runner on third, less than two outs. You need to get that guy across. Chris Dickerson knows this by heart.
2. Justin Maxwell's home run was his twelfth of the year and he is leading the IL. Drew Sutton is leading the IL with doubles, but he's sharing that spot with like three other guys.
3. "Two things I didn’t know about Dennis Newman. One is that his last name is actually Neuman. The other is that he never pitched above low Class A before getting a 1-2-3 eighth." - DONNIE COLLINS, THE GREATEST SPORTSWRITER THIS WORLD HAS EVER SEEN.
4. "Pawtucket manager Arnie Beyeler is killing his team. Other IL managers take note. He just got McKenry thrown out at home by Dickerson. By rights, that’s the second runner he had thrown out at the plate today and the fourth in the series. Montero dropped the ball at home on a perfect throw by Brewer — a huge play in the game — but really, how bull-headed must he be to keep sending runners on the Yankees outfielders?" - ibid.
5. Michael Bowden pitched a 1-2-3 seventh. I am glad for his success as a reliever.
6. Nate Spears seems clutch, but I cannot find any statistics that reveal his AVG with runners in scoring position. Can someone dig this up for me and shoot me an e-mail? I would be much obliged.

I'm gonna do something different right now. Yesterday I was in Vermont to see my sister do this ten-mile muddy obstacle course pain-fest event. And I know that baseball players possess a specialized athleticism that I can't really compare to, but this was a remarkable show of human strength, power and grit. So congratulations, Lucky, on being a real badass... Trot Nixon would be so impressed.