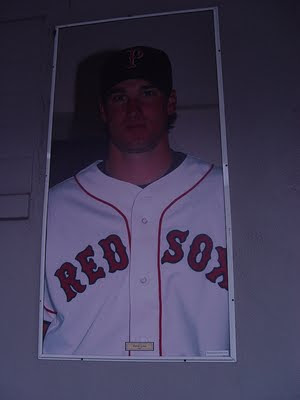 Derek Lowe is a right-handed pitcher who played for the Pawtucket Red Sox in 1997. Through six games, Lowe had an ERA of 2.37 and his record was 4-0.

Six games does not really give me anything to work with. 21 strikeouts, 11 walks. 23 hits. Lowe didn't come to the org until July of that year, which you guys all know about.

Unfortunately, that's all I have. Derek Lowe's spooky mural is in the middle portion of the home plate tower.
Posted by Jenks at 6:51 AM

Really? Is that the best blog post you could come up with for Derek Lowe? THE Derek Lowe??