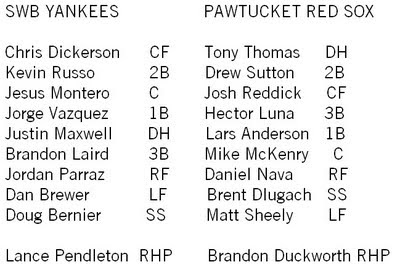 Brandon Duckworth got the start for Pawtucket. It was a great start and it was fucking wasted. Except for a shaky first inning... A leadoff double, a HBP and a walk. Then a sac fly by slugging first baseman Jorge Vazquez that Matt Sheely kinda effed up and almost turned into a grand slam.

And Pawtucket could not do anything. Lars Anderson tried, bless his heart, hitting a couple of doubles, but look who's batting after him! Nava! Dlugach! Hector Luna should have batted after Anderson... Okay, never mind, I'm not a manager.

Clevelan Santeliz allowed a single to Kevin Russo in the ninth. A stolen base, a throwing error, and a sac fly brought him across the plate to put the Yankees up 2-0. Pawtucket completely teased everyone when they led the bottom of the ninth off with a single and a double with no outs... They subsequently scored when a ground ball by Nava pushed Hector Luna across, but Dlugach hit a fly ball to center, possibly the kind that thrills the kids but is ultimately caught on the warning track or something. I don't know, I wasn't there.

i should know, i had to go there myself:
1. Hector Noesi was originally scheduled to pitch for the Scrankees, but he was called up.
2. Lance Pendleton and his wife have a safe word.
3. Sexy young catcher Jesus Montero was ejected for the classic 'strike arguing' violation. “I thought it was high,” Montero said.
4. This game summary has been approved by the floating head of Brandon Duckworth.
5. Speaking of Brandon D, who thinks he could get the call from Boston? Just thinking about angry people calling into radio stations over this is filling me with glee. TRADE LACKEY FOR VERLANDER!!!!

Kris Johnson is starting for the Red Sox. Oh, this should be good. Could this be Johnson's last chance?
Posted by Jenks at 6:27 AM