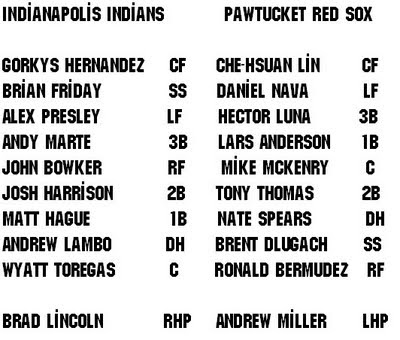 Gee, what happened to this PawSox blog? Just kinda fizzled out, eh? MY DAY WILL COME. I KNOW SOMEDAY I'LL BE THE ONLY ONE. Although the 'Superlatives' video is pretty entertaining, if you were a fan of Chad Paronto... Or if you wanna hear L. Anderson talk about how he takes a spaceship to work. And Robert Manual!

Pawtucket dodges the sweep, takes this one 9-2. I suppose that Bobby Jenks technically started this game, but please, take it to a Boston blog. Andrew Miller and his luscious hair pitched seven innings! One hit, zero point zero zero runs. WHAT. Miller's tight little pitch count was 79. Only 48 strikes? He's not a cool guy anymore.

Brad Lincoln! Not dead yet! Lincoln started for the Indians and pitched five innings, giving up seven runs on nine hits. The world will little note nor long remember his start. Pawtucket small-balled the crap out of Lincoln, getting a nice early start in the first inning when Che-Hsuan Lin singled, stole second, and eventually scored on a single by Hector Luna.

The Red Sox scored their second run in the second inning. Bermudez hit an RBI double. Yeah. Sorry, I can't make this inning come to life.

Ronald Bermudez came through again in the fourth, slapping on another RBI. Who needs Josh Reddick anyway? Tony Thomas had led the inning off with a double, so that was really nice of Bermudez to take advantage of it.

Che-Hsuan Lin led off the fifth with a double. Daniel Nava... God, never mind. Pawtucket hit three home runs in this game and NATE SPEARS IS FINALLY BACK! NATE SPEARS! Hideki Okajima gave up his first run in the International League. There were more than 10,000 people at the park for this game and not one of them was me. It's the fireworks. How many of those people do you think know who Hector Luna is?

I shouldn't have said that. Nothing wrong with just going to a baseball game. I do it all the time.

it's so hard to be your friend and be in love this way:
1. The home run kidz were Tony Thomas, Bermudez and Dlugach. And me, because I hit a home run every time I do a game summary.
2. Ronald Bermudez went 3-4 with 4 RBI.
3. You know what? It's Kevin Pereira who hits a home run with this game summary. This kid is so talented. I'll bet he is the reason B. McGair has ramped up his game this year.
4. Josh Reddick did not play.

Tonight! Norfolk Tides and allegedly John Lackey. Have fun... And if you can't be good, be careful.
Posted by Jenks at 8:59 AM