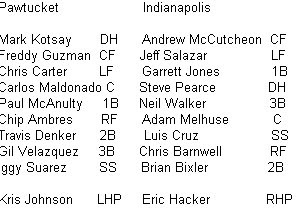 Lefty Kris Johnson and his Tims, his baggy jeans, his thug appeal pitched 4 2/3 innings, sucking 107 pitches out of the boy. Holy crap. Johnson was all over the place, not throwing strikes, same old.

Johnson walked five guys and gave up five runs (three earned) on six hits. That's a total of 21 walks v. 33 strikeouts so far this year. I'm gonna stop right there, stats-wise, because I don't care that much.

Fortunately, Pawtucket kept pace with Indianapolis throughout the first five innings, pulling ahead at the top of the fifth with a couple of walks that led to Iggy Suarez' two-run double. Holy crap, the bottom of the order drove runs in!!!

With the game score at 6-5, Chris Carter singled in an insurance run at the top of the eighth, scoring Fly Freddie Guzman. And there lies the final score, 7-5. Marcus McBeth got the last out in the ninth for the save, after Javier Lopez miraculously got the two lefties out at the top of the ninth.

two things:
1. It's funny how the rare times when Pawtucket scores more than three runs in a game, the pitching fails. So funny I forgot to laugh.
2. Rocky Cherry continues to be a great reliever, pitching an inning and a third with no hits or walks or anything.
3. Vaquedano yanked KJ out of the driver's seat in the fifth inning and seized the steering wheel. He pitched 2 1/3 innings of scoreless relief. Vaquedano was NOT going to prolong the losing streak! NO!! Vaquedano also picked off the speedy Luis Cruz at third base. YES.
4. Indy starter Eric Hacker struggled as well, only lasting four innings and walking half the park (7 walks all told).
5. Maldonado is back! Maldonado went 0-5 with a strikeout, but it's okay, he's warming up.
6. Angel Chavez and Dusty Brown had the night off. Van Every has a sore something or whatever and has missed a few games while he gets better.
7. Holy hell: Paul McAnulty tripled! That must have been really funny.

Tonight! Ty Taubenheim and Knight Rider will face Charlie Zink, who hopes to keep rolling. I love Ty Taubenheim!
Posted by Jenks at 8:28 AM

That's okay. They used to play that song when he pitched in the majors... I wanna say Houston or some NL team. They loved him.

He is a massive man.