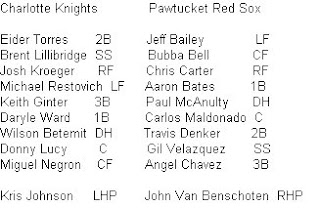 Kris Johnson started, just back from Lowell or whatever. KJ got the heave-ho in the fifth after walking Negron, the number nine batter for the Knights. Cardinal sin, man. It's like walking a pitcher. Handyman Randor Bierd took over and did a top notch job in relief for 2 2/3. No score through seven innings for either team, so extra innings ensued. It was a wobbly Hunter Jones who spoiled the party when he gave up a solo homer to Josh Kroeger in the eighth. Aw.

That's pretty much it for game one.

Except:
1. Kris Johnson had five K's, Bierd had four. The Knights may rival Pawtucket in Bat Absence, though.
2. Wilson Betemit! What is up, you old goat!
3. Chris Carter made a jerk of himself in right field. It was a fucking disaster, really. I can't even describe his ineptitude. "Intense" comes to mind.
4. Jeff Bailey hit a single. The clock is ticking and I feel like these are Bailey's last days. What the hell am I gonna do? Bailey and Ron Johnson have pretty much ridden shotgun on this blog since its inception. I shall be adrift.
5. Carlos. Freaking. Maldonado. YES. He allowed two stolen bases, but who cares? He's my favorite.
6. Bubba Bell in the house! I'm surprised that this is his first appearance in AAA, because I remember seeing him at the park last year. Turns out he was just using the facilities.
7. Travis Denker does not look like much, but he is a serviceable infielder.
8. Paul McAnulty was ejected for strike zone bitching.

Tonight! Smoltz b/w Clay Buchholz. Go if you're gonna, but I'm staying home. If I'm addicted to anything, it's sparklers.