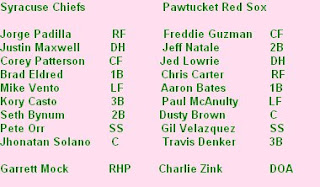 The Chiefs, who have nothing to do with Native Americans (it's a choo-choo train connection, I think), take it from the Red Sox. 6-2.

A double play (scoring Maxwell from third) and a ground out wrapped up the first inning for Zink. CZ kicked off the second inning with two quick outs, but then loaded the bases with two singles and a walk. Corey Patterson singled again to score the third run for the Chiefs.

So, to sum up: Five messy innings and a clean, one-two-three sixth for Zink and he leaves the game with Syracuse ahead 4-1. All you need to know about Rocky Cherry is that he pitched two scoreless relief innings.

Randor Bierd came in for ninth inning relief, and Bierd is no Rocky Cherry. Okay? A single, a walk, a sac bunt... and then slugger Brad Eldred hits a two run double. Not cute at all.

Logan Kensing pitched the bottom of the ninth for the Chiefs, but Pawtucket couldn't rise to the occasion. And now Van Every's gone. If it's love you want from me, then take it away.

it's the kind of game you want so much, it makes you sorry:
1. Charlie Zink has been with the org since 2002. He first pitched for Pawtucket in 2005. Zink has also been used as a reliever. All told, he's pitched 77 games for Pawtucket. I feel like I've seen all of them. And I don't know what more I can say.
2. Oh, yeah! Pawtucket scored two runs! Thank the fabulous Freddy G and puckish infielder Jeff Natale for their RBI's.
3. I saw Justin Maxwell on TV last night. I heard he was handsome... he is.
4. Syracuse left fielder Mike Vento went 3-5 with a double and a triple. So he was a homer shy?
5. Travis Denker struck out three times. Wildly unrelated: In Norfolk, I feel as though Denker got screwed with stolen base calls (as a fielder, not a runner).
6. Chiefs starter Garrett Mock is IL pitcher of the week! Walk right up to him, give him a great big kiss!
7. Freddy Guzman is so hot right now (.329 this month)! He is much more interesting than Bubba Bell. I know everyone loves Bubba Bell, but guess what? He might not love you back.
8. Jed Lowrie hurt his knee or something and left the game. That statement is somewhat inaccurate, but W/E.
9. Wait a minute, don't I hate Van Every? Come on. It's a new day, a new way. Aren't we all capable of assholism on any given day?

Tonight! Former Marlin Scott Olsen (or "Scotty O", as he likes to be called) versus humorless righty Michael Bowden. Am I going? Does a one-legged duck swim in a circle?