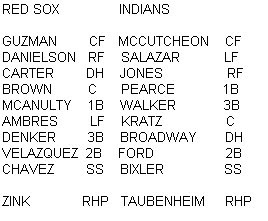 Boston wannabes WIN! 4-2. Sorry, troubled franchise. Not even Ty Taubenheim and his giant wiener can save you.

Charlie Zink pitched 5 2/3 innings with two walks, which is on the modest side for him. Zink kept Indianapolis scoreless until the sixth inning, when Garrett Jones hit an RBI double and Neil Walker hit an RBI single to get Indy on the board with a pair of runs.

During that sixth inning, Steve Pearce was caught stealing for the second time. I know it's not hard to steal on a knuckleballer, so nice work Dusty Brown!

Indians starter Ty Taubenheim was so-so. Two walks and eight hits led to a couple of Pawtucket runs during his 5 1/3 innings of work. Reliever Jason Davis, who is surprisingly just as massive as Taubenheim, continued to be moderately ineffective for Indianapolis and gave up the other two runs in the seventh. A couple of walks, an error, and a couple of sacrifice plays put Pawtucket ahead for good. Sorry, I have no further details.

Number of Pawtucket runs scored by sac method (or productive out, if you will): 3 out of 4. So it wasn't a blazing offensive display. Second verse, same as the first.

two things:
1. Travis Denker went 2-4 with a double. Denker also played third base for what I think is the first time this year. Chavez played short and Velazquez played second. They should have put McAnulty in center if they wanted to go full-bore wacky!
2. Ron Johnson was just kidding: everyone went back to their normal infield positions for a stronger defense in the eighth inning. Billy Traber needed it. Fernando Cabrera did not. Oooh, burn!
3. A terrific game account here. With photos!
4. And some good photos here. Check these out if you're into ballpark hopping. I am, a little.

And road trip over! I was going to go to the airport with my family and wait for everyone with some colorful balloons and hand-made signs, but then I realized I could stay home and eat bonbons while watching reality TV. But you go ahead and use my idea.

Tonight: Bowden and his strong core v Homer Bailey (allegedly). I'll see you there! I can't wait!
Posted by Jenks at 12:26 PM