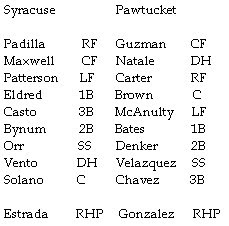 Chiefs win, 12-0. Because Marco Estrada is a 24-year-old lefty with a mean mug and a huge ass. Except he's a righty with an average build and soulful eyes. I'm pretty sure he went to school with Abe Alvarez at Long Beach State, too.

Enrique Gonzalez pitched five innings and gave up eight runs on twelve hits. He also walked three guys. He could have given up one run or a hundred runs, but what does it matter if Pawtucket doesn't score? Gonzalez is not the problem.

Rocky Cherry pitched a couple of innings. Three singles, three walks, and a balk translated into two additional Syracuse runs. Randor Bierd pitched a two-run inning. Only Vaquedano made any sense in a world filled with Maroon 5 and $30 flip-flops: He pitched a perfect ninth.

Considering the Chiefs scored 12 runs, you'd think there would be a home run in there somewhere. WRONG! Aside from three doubles and a triple (tough guy Seth Bynum), Syracuse just chipped the shit out of Pawtucket pitching. Nine walks and THIRTEEN singles. A balk, but NO stolen bases.

Guzman, Natale, and Velazquez all hit a single. That is the extent of Pawtucket's offensive output. They should form a tree house club and not let Chris Carter or Aaron Bates in.

I think that about covers it.

Two things:
1. When Syracuse brought in pitcher Jorge Sosa in the eighth, they moved designated hitter Mike Vento over to first base to replace hulking Brad Eldred. Sosa batted for himself in the ninth and drew a walk from Randor Bierd. Damn, Randor. Also: Damn, Eldred. What did you do?
2. It's also worth noting that Sosa's an NL pitcher and can likely figger it out at the plate.
3. Gil Velazquez made his 12th error! He's already passed his 2008 total of 11. My blatant favoritism will not allow me to be critical of Velazquez, who I consider nearly untouchable.
4. No one on the PawSox walked last night.