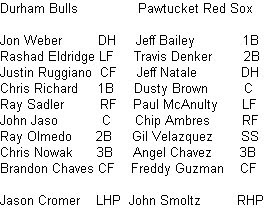 Red Sox fans enjoyed a cold, delicious Smoltz tonight at McCoy. JS was only supposed to pitch five innings, but he whined until he got his way and went six in 74 pitches. It was remarkable. Many local weirdos came out to see this event.

Smoltz only gave up one run and it happened in the second inning. Ray Olmedo hit a sac fly to score Chris Richard from third. And that was essentially all the Bulls could do.

Rocky Cherry came into the game in the seventh and gave up a double to the first batter, Ray Sadler. After getting the skinny Hawaiian kid to ground out in the eighth for the first out, Cherry split the scene so Billy Traber and His Amazing Square Head could face lefty Jon Weber. Traber walked Sadler and then walked the next guy, Eldridge, on four pitches. So that didn't really work out.

Strapping young closer Fernando Cabrera had to save Traber's ass and get the last five outs of the game. Cabrera handily struck out the next two guys to end the eighth, but the ninth inning was a little more of a battle for Cabrera. Pain in the ass Sadler started the trouble with a single.The next batter, catcher John Jaso, flew out to left, but then Ray Olmedo hit a single that moved Sadler to third.

One out, runners at the corners for Cabrera. Pawtucket leading by only one run. Pinch hitter for Durham, Henry Mateo. RJ comes out to the mound, but doesn't yank FC. Tension. No one warming... but Cabrera gets Mateo to strike out! PIMP.

And it's that skinny Hawaiian outfielder again, Chaves, who hasn't done crap all night. Chaves hits a weak grounder and Cabrera picks it... gets it to Chavez and Sadler's caught on the way to home... he darts back but Chavez tags him good. Out! Game! YES.

Pawtucket offense: Solo home runs from Bailey and Ambres, both off starter Jason Cromer. That's it.

jitterbug. jitterbug:
1. It's a good thing Bailey hit a home run. He seemed nervous about the Smoltz thing because he fumbled around with the very first ground ball before he tossed it to Smoltz for the out. Later, a grounder by Eldridge shot right through his legs, Buckner-style.
2. Also, when Bailey says "May I have your attention please?" over the PA at the bottom of the first, it startles me every time.
3. Jeff Natale is back! I have it on good authoritah that he reads mallrat vampire books. Even ask him.
4. "Jaso" is like "Jason" without the 'n'.
5. Hey, it's IL repeat offender Ray Olmedo!
6. Hyder's post-game talk was with Chip Ambres, who went 2-4 with a double. The other night it was Travis Denker, who kind of just droned and mumbled. Chip came across loud and clear and far more lucid. This is because Ambres is the man.

I think Cabrera deserves a t-shirt, don't you?

I love this picture so much.