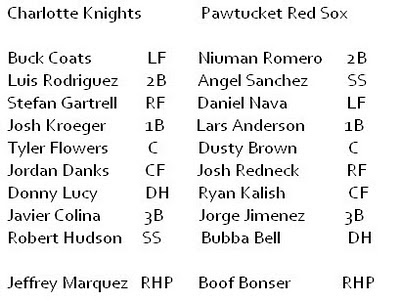 And starter Jeffrey Marquez wore stirrups. 3-2 Knights. And last night's game featured Me and Vee in the blue seats. With diamonds!

Boof Bonser was the Red Sox starter last night and he's currently my favorite. Bonser is taking this all very seriously, too. And he's way more exciting than Prospects of Note.

Bonser pitched seven innings, threw 86 pitches. I think he looked pretty good, but what do I know? New kid Ryan Kalish helped him out with some balls-out catches in center. I am not a huge Kalish fan but how could I not be impressed? Besides, his lower half is hewn from mighty oaks.

Bonser left the game with Pawtucket ahead, 2-1. Chad Paronto entered the game and spoiled it by giving up a two-run homer to Luis Rodriguez. Ooooh, unfortunate... and a little uncomfortable for everyone.

Pocket reliever Fabio Castro managed to keep the Charlotte kids from scoring further, but the Red Sox could not score a third or fourth run. It would have been a terrific game if that had happened.

Knights starter Jeffrey Marquez is an exceptionally good-looking young man who happened to strike out five member of the Pawtucket Red Sox. Bonser beat him with six K's, however. Not that it's a competition. Except maybe it is.

The Red Sox two runs came courtesy of numerouno and his first Pawtucket home run. Romero could not have done it without his bizarre haircut.

dream weaver:
1. Fernando Cabrera came into the game in the ninth to get one out. Watching him pitch is a revelation. Him and his long, powerful legs. Some people like sensitive vampires and werewolves. Some people like Hollywood leading men. Some people like racecar drivers. Some people like well-appointed pop stars. I am a creepy older woman and I LIKE FERNANDO. I am like Wayne Campbell upon seeing Crucial Taunt for the first time, every time. There's never anyone good looking on the PawSox so this is a modern marvel. Now pardon me while I make a puffy-paint t-shirt.
2. Knights reliever Erick Threets and his dirty tattoos got the win.
3. I read this Mark Harriman report and I have to wonder... was this his first McCoy visit? What's with the press box food and autograph seeker comments? Not bad overall, though. I have every right to judge!
4. It was raining pretty hard and I did not think this game would be played. Turned into a cool evening. And Charlotte first baseman Josh Kroeger has a remarkable fanny.
5. I recently saw members of the Charlotte Knights at a bar in my neighborhood. You would think meatheads like that would be chugging beers and being all loud. Not so! They were mostly well-behaved and enjoying some Keno. Like your mémère might.