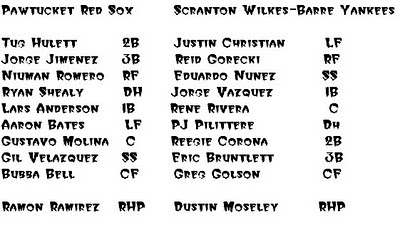 And that's tonight. 7-6 Pawtucket, TJ Large wins and Kei Igawa loses. The starting pitchers did not figure into the decision. In a related story, I can't believe Igawa is still hanging out in Pennsylvania.

Romero Ramone gave up six runs, but only three of them were earned. Blame Gil Velazquez and his two errors. Velazquez couldn't seem to do anything right last night... he also was caught stealing.

But enough about those guys! The story's in the run production. Pawtucket struck first in the second inning when Anderson hit a solo home run. SWB topped that shit in the bottom half of the inning with a two-run homer by Rene Rivera, and tacked on a third run in the bottom of the third.

The Red Sox were undaunted. In the fourth inning, with runners on first and second, Lars Anderson got his second hit of the night - an RBI double. Aaron Bates' ensuing groundout allowed Shealy to score from third. Gustavo Molina... yes... batted next and BLAMMO! hit his third home run of the season. Two more runs! 5-3 Pawtucket!

Fifth inning, white hot Bubba Bell leads off with a double and Jorge Jimenez eventually drives him in. In the home half, Scranton scored three runs to tie the game up at 6-6. Smug bastard Reid Gorecki figured prominently.

In the seventh inning, the PawSox hit a few singles and Bell wound up scoring. Use your imagination, but credit Niuman with the RBI. 7-6 Pawtucket and that was the final score, thanks to Robert Manuel and Fernando Cabrera being sexy things, taking pictures and carving them into wood reliefs...

Some guy Wordekemper made an appearance for SWB. I loved him on Hogan's Heroes!

two things:
1. Manuel's tiny itty-bitty ERA now stands at .95. Shame he didn't get to pitch with the big kids, but I am confident that he'll return when Atchison or Richardson come down. Or if one of them meets with an unfortunate accident.
2. Rajon Rondo hit Pilittere with a pitch, which he totally had coming after wrecking Dusty Brown the other night. Eff you, PJ!
3. Gustavo Molina and his three home runs = 2004 Doug Mirabelli.
4. Looks like Lars finally got laid - he went 3-4 with that home run and double.
5. Tug Hulett went 0-5 with a strikeout. Bates was 0-4 with a K, but he at least got an RBI.
6. Niuman Romero's been playing left field these past few games. Not metaphorically.
7. Don't feel too bad, Gil: Jimenez and Romero were also caught stealing.
8. This blog (Ghost of Moonlight Graham) has read my mind: Let's strip-mine the Cleveland Indians!
9. I have no idea what a 'frelen' is, but if you've always wanted to see Lars Anderson's knees, take a look.
10. The Yankees are second place in the IL North division. Syracuse is number one! I'm excited. I mean, in the abstract.
11. Okay, it's official: I LOVE the Donnie Collins SWB live blog. I have gotta try this some night when I have nothing better to do. Because I am unoriginal.

Kei Igawa has some wacky, five-year MLB contract, right? I think he's making big money, which is why the Yankees won't just outright release him, even though there is no chance of a trade or him getting back on the active roster.