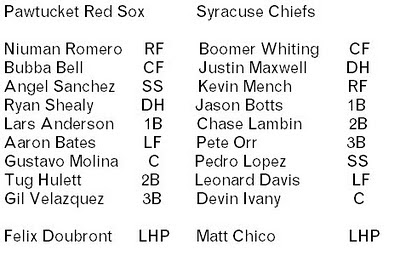 If lefty-lefty matchups induce turgidness in your crotchal region, then this was the game for you. I don't know too much about Matt Chico (sounds like a tough guy from a B/W Western), but he seems popular? I'll tell you a whole bunch more about Chico... later on.

Gabbard, Large, and Hottovy all got a piece after Doubront finished for the night. Gabbard gave up a home run. I think Gabbard was Jeff Bailey's roomie one summer. One word: Copious.

let me do this first:
1. Batting coach Gerald Perry was ejected.
2. Bubba Bell has finally been moved up in the lineup! Bell batted second and went 2-3. I never really liked Bell until he started heating up. This is because I am the worst type of bandwagon fan.
3. Kevin Mench is still alive?
4. Tommy Hottovy! Hottovy entered the game at the bottom of the seventh with the bases loaded and one out. TH induced a double play and went on to pitch a scoreless, hitless eighth. He then flipped off TJ large.

and now let's talk about Matt Chico:
1. Chico had Tommy John surgery in 2008.
2. MC was called up to the Nationals this year and then DFA'd. Was that weird? Maybe... here's an explanation.
3. Chico feels he has completely recovered from surgery.
4. Chico could return to Washington.
5. Check out Chico's new pitch: Two-seam fastball. Sorry if that sounds like there's video... there isn't.

Damn, I have to wrap this up. I'm taking the day off tomorrow! I was invited to a NASCAR race (not a NASCAR "game", as I keep calling it). Never been to one and I am wild with anticipation.