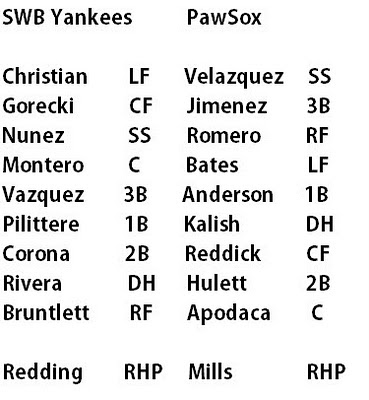 I feel like we just saw this Redding/Mills matchup a week ago. Except Mills was much better last night. Seven one-run innings is a good start. And Robert Manuel and Kason Gabbard split the last pair of innings and provided scoreless relief for the PawSox.

Aging righty Tim Redding got the start for the Yankees. Redding kept Pawtucket to two runs until the sixth inning, when Aaron Bates led the inning off with a single. Designated hitter Ryan Kalish hit another single with one out in the inning, allowing mega-star Tug Hulett to hit a two-run double. 4-0 Pawtucket!

Scranton scored their first run in the top of the seventh inning when Rene Rivera hit an RBI single. PJ Pilittere also tried to cross the plate on Rivera's hit, but he was thrown out at home by the ordinarily useless Josh Reddick. Good work, Reddick. This pissed off Yankees manager Dave Miley enough to get him ejected while he was arguing the tag at home plate.

And then the Lord Jesus Christ finally tore himself away from the Astros game and said, "Mark Melancon... tonight is not going to be your night. Learn from your suffering." Melancon's first order of the night was to strike out Velazquez. Okay, easy enough. But then he walked Jimenez. And Niuman Romero. And hit Aaron Bates with a pitch. I'll bet Melancon thought he had an easy out when Lars Anderson came to the plate... not so, amigo! Anderson could have walked, I guess, but instead he doubled, scoring Niuman and Jorge. (They said I could call them that.)

Ryan Kalish added a third run to the inning when he hit a ground ball and reached on a fielder's choice. "Fielder's Choice" sounds like something you might call one of those cheap condom brands you buy at dirty convenience stores. You know... the ones that sell incense and roses in glass tubes.

Anyway, Bates scores on the Kalish deal and it's 7-1 Pawtucket. And that was it.

two things:
1. Lars Anderson hit two doubles last night. Tug Hulett walked three times. On my ceiling.
2. Pawtucket could really have piled on the runs, but... you know. They left 11 guys on base. Ryan Shealy should have been in the lineup. Then you would have seen a motherfucking PASTING!!!!
3. Well, so much for my PawSox game live blog idea... these assholes got the jump on me.
4. Damn it! Well, that has sufficiently ruined my morning. Oh, well.
5. Gustavo Molina's been called up. I love how no one confirmed anything for like a week. I'll bet Dusty brown is super pissed off!

Tonight! Doubront v Romulo Sanchez. See you there... YES.
Posted by Jenks at 8:04 AM

Dusty Brown is still hurt, right? I'm assuming that's why they purchased Molina's contract and brought him up to Boston.

I hope Lars and Kalish keep hitting! Lars might have a spot in the lineup, as a back-up to Youk and Ortiz next year, and maybe full-time duty in 2012. Kalish looks like he could replace Drew or whoever is in left with a strong second half.

Brown is still hurt and I doubt he'll be back any time soon.