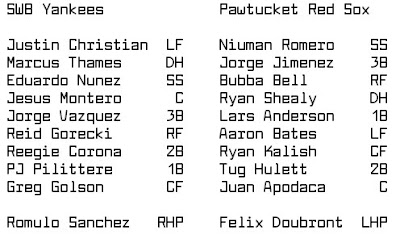 Are you excited? I know I am! Pawtucket wins 6-5, no thanks to Fernando Cabrera. Still, I would empty my bank accounts for this man if he asked me to. Of course, baby, anything you need...

Felix Doubront could be fascinating. Doub... I wanna call him 'Doubie' so bad. I have to suppress that urge. Next thing you know, it'll be 'Brownie' this and 'Batesy' that. I'm not in a place to throw that around.

Doubront was dazzling no one last night, but it was a serviceable start. He only worked five innings, but his pitch count was creeping up and he seemed fatigued by the fifth inning. Doubront immediately gave up two singles at the top of the ninth and then walked that PJ Pilittere asshole to load the bases with no outs.

Doubront managed to get the guy batting ninth (Golson) to strike out, but then he walked in a run with leadoff guy Justin Christian. Damn, there're a lot of outfielders named Justin. A rehabbing Marcus Thames followed that with an RBI single to left, changing the 5-0 score to 5-2.

Doubront then struck out Nunez and Montero to end the inning.

Enormous Yankees starter Romulo Sanchez had problems of his own. Pawtucket got a sac fly run in the first, but the second inning might be the one you'd want to record and watch over and over again. Tug Hulett hit a two-run double and fresh young mind Juan Apodaca hit a massive two-run homer. I was there! 5-0 Pawtucket at that point.

Scranton reliever Jason Hirsh took over for Sanchez and man, is he tall! Hirsh finished off the rest of the game and confounded the Pawtucket kids, who were unable to score additional runs.

Fabio Castro and Chad Paronto worked together to provide excellent relief... Tommy Hottovy came in for the ninth and I don't know, he looked good but he got the hook after two outs. Fernando Cabrera trotted out from the pen to face pinch hitter Jeff Natale. Natale rather rudely hit a two-run single to bring the score to 6-4. Cabrera walked Nunez and gave up a double to superstar Jesus Montero. Etc. Thankfully, Jorge Vazquez struck out to end the inning, but dude, that was too close. Cabrera came pretty close to ruining Christmas... Montero's ball hopped into the bullpen for a ground rule double, but imagine if it just rattled around in the corner? TIE GAME.

THIS IS THE BEST PART RIGHT HERE:
1. Evidently, Felix Doubront has a three-year-old son. Isn't he, like, 20?
2. PJ PILITTERE BROKE DUSTY BROWN'S THUMB! PJ PILITTERE BROKE DUSTY BROWN'S THUMB! I know he got plunked for it, but he deserves another one. Let's get that guy!
3. Niuman Romero is growing on me. Romero went 2-3 with a double. Lars Anderson went 0-4 with a couple of strikeouts... Anderson was not happy with home plate ump Chris Conroy, but screw that! I like Conroy!
4. All he does is win? Jorge Jimenez is really popular, but last night he went 0-4. Slugger Ryan Shealy also went 0-4.
5. Ha ha! Bubba Bell and Robert Manuel have to go to the All-Star Game while their teammates sleep all day, smoke weed, and play video games!
6. Reegie Corona and Reid Gorecki executed a lovely double steal in the fifth inning. Next time you sing 'Copacabana', you can insert 'Reegie Corona' and it works nicely.
7. Oh wow, look. Marcus Thames. I mean... Marcus Thames.
8. I had no idea Eduardo Nunez was some kind of hotshot.
9. Oh, wow, look. It's Jeff Natale.
10. (This number left blank intentionally. Please write something nice about Tug Hulett.)

Tonight! Ivan Nova, Kris Johnson. Nova could totally squish Johnson. That would be ideal, actually.
Posted by Jenks at 11:38 AM