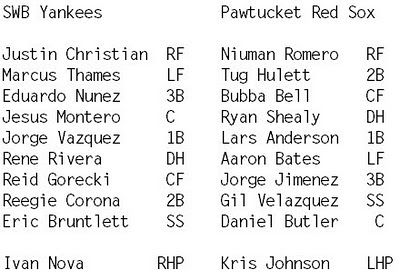 Struggling Team WINS! 8-6. Yes, Pawtucket lost, but look at how many runs they've been scoring lately! And it is official... Bubba Bell has an armadillo in his trousers.

Kris Johnson gave up nine hits but the Yankees only managed two runs. Lefty Kason Gabbard was not a very good reliever... he jumped into the game in the eighth inning and only managed to get one out. Five Scranton runs can be blamed on Gabbard. Three walks! Three hits! And everyone was there with their families, their small children, gathered to celebrate and see some fireworks... and, you know, maybe see the home team beat the Yankees! And everything was going fine but KASON GABBARD made the children scream in agony... brother turned against brother... the fireworks lost their sizzle... oh god, there was blood everywhere...

For crying out loud. Why not just bring back guys like Chad Spann or Craig Hansen? Jeff Corsaletti or Lincoln Holdzkom? Strongly. Worded. Letter.

Okay, Ivan Nova. Great name. Nova flounced his way through seven innings and held the suddenly power-mad PawSox to three runs. Those three runs were all Bubba Bell's, as he hit a humdinger in the third inning. Royce Ring pitched a scoreless eighth and Zack Segovia was all confident entering the ninth inning with a 8-3 lead.

And then! PawSox fans' hopes were ignited when it looked like Pawtucket was gonna mount a comeback. The unreliable Aaron Bates flew out, but then Jorge Jimenez graciously accepted a walk. Velazquez singled. So far, so what? New catcher that no one ever heard of Daniel Butler struck out... two outs for Segovia!

Then Niuman Romero hit a home run! Everyone was so excited. 8-6 Scranton! Dave Miley had seen enough of Segovia, though, and brought in star closer Albaladejo. Tug Hulett was clearly intimidated and flew out to center field. Awww... That's okay. It's not Hulett's fault that he's an older version of Travis Denker.

energy:
1. Rich Hill made his first PawSox appearance and I'm sorry I missed it. I love how these miscellaneous players pop up in triple-A. Like, oh, hi, Jason Lane is on the PawSox now.
2. Tommy Hottovy took over after Gabbard crapped his pants on the mound. Hottovy is gonna be 29 in a few days. I can not even believe it.
3. Jorge Jimenez made two errors. AND THEY STAY THERE! AND THEY STAY THERE!
4. Jonathan Albaladejo has tied the all-time saves record for Scranton Wilkes-Barre.
5. Is Albaladejo a harder-throwing Colter Bean?

6. I can't stop talking about Donnie Collins! Here, Collins discusses the Yankees triple-A all-stars.
7. Kason Gabbard likes to have a good time. Gross!
8. You might as well read Dan Hoard's account of Daniel Butler's meteoric rise to Pawtucket. You won't find any better.

Tonight! Fresh double-A meat David Phelps will hopefully out-pitch Michael Bowden. No offense... I just think it would be a cute story for Phelps. Wait, you ask, don't you hate the Yankees?

Jason Lane, wow, what a blast from the past. Wither Michael Coleman nowadays?

Butler has an interesting backstory, neat!