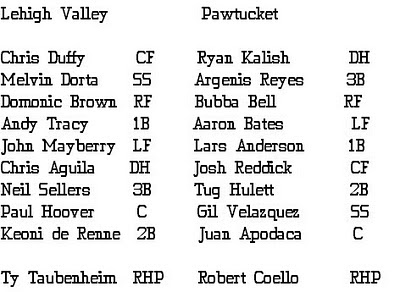 I wish I did! 8-0 Pawtucket and THEY TOOK NIUMAN ROMERO? What is going on? Should I be nervous? Am I gonna go to the park some day and the entire team will be replaced by the Charlotte Knights?

Ty Taubemheim! Taubenheim was not so lucky last night. In the first inning, he gave up consecutive walks to Argenis Reyes and Bubba Bell. And then Aaron Bates homered... his seventh of the year. 3-0 Pawtucket!

Nobody scored at all until the bottom of the sixth inning when an error, a walk, and a couple of groundouts led to a run.

In the bottom of the seventh, righty Ryan Vogelsong was in for Ty Taubenheim. Gil Velazquez hit his first triple of the year to lead off the inning! Apodaca walks, and leadoff batter Ryan Kalish hits an RBI single! 5-0 Sox!

Vogelsong walked a couple of more batters (geez, control yourself!) and mixed in a double and a sac fly and when the dust cleared, it was 8-0.

And then nothing else happened, right? Yes, that's about it.

i'd rather be in canada:
1. Argenis Reyes is a daywalker. I remember him from Columbus or something.
2. Four RBI for Aaron Bates. Hip hip hooray.
3. Anderson and Reddick each doubled. Reddick had three RBI... I'm just reporting the facts, here. Lars Anderson made his fifth error... then called his roommate trailer trash during a late-night fight... he has emotions.
4. "Bobby" Coello? You don't say...
5. It was Taubenheim's first start since his promotion from double-A.
6. "The game was played at Pawtucket because of an International League rule that all league teams must play a home game on the night of their Fourth of July weekend fireworks displays." - Lehigh Valley Live
7. I seriously cannot believe they took Niuman Romero.
8. Keoni De Renne was on the PawSox for like five minutes back in... 2007? Wait... how long have I been here?

Tonight! PawSox travel to Pennsylvania for hookers and legalized gambling. Or water ice, whichever. Adam Mills, JA Happ. Should be pretty wild.
Posted by Jenks at 8:14 AM