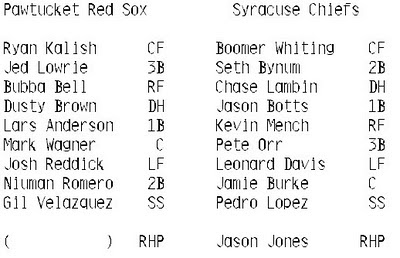 9-5 Pawtucket, accomplished without Fernando Cabrera, who was with the big team and now everyone hates him.

Lefty Fabio Castro got the win for the Red Sox, pitching two innings. Castro gave up a run on four hits and walked two. Remarkable!

Chad Paronto, Rich Hill, and Michael Bowden combined to staple the game down for Pawtucket. I would say that Rich Hill had quite a few problems, much like Albert Brooks. Hill kicked off the 8th inning and immediately gave up a couple of singles and a walk. Outfielder Boomer Whiting got all excited by his teammates dangling in front of him, loading the bases with no outs... bang, double. Two runs score.

Hill, shaken but not stirred, then walked Seth Bynum. So, is he related to Freddy Bynum or what? Torey Lovullo had seen enough, and subbed in Bowden to get some outs. Damn it. A strikeout and a double play ending the inning. Good job, Michael.

Bowden went on to pitch the ninth inning and got two more strikeouts and allowed no further Syracuse hits.

Chiefs starter Jason Jones is not only faced with a lifetime of anonymity, he also gave up five runs before he even got out of the fourth innning. His cohort in suck, Atahualpa Severino, piled on an extry four runs in the sixth.

Pawtucket batters/rehabbers presented a rare display of power, hitting four home runs between them. Lars Anderson doubled and tripled, which was probably very exciting. Anderson tallied up three RBI as well, so write that down in your little notebook.

ALT+so:
1. Jed Lowrie got some action in the field (but probably nowhere else, ZING!) and played third. Lowrie went 3-4 with a home run, a double, and a pair of runs batted in. He also did a little base-stealing. And yet, my feelings about him are ambivalent at best. I was always more of a Joe Thurston kind of lady.
2. Bubba Bell went 0-5 with a strikeout. Uh-oh. Bell's only batting .237 in the last ten games. Time to put on the Panic Pants?
3. There were 21 hits between both teams. Not a great night for pitching, overall.
4. Dusty Brown DH'd and hit a solo home run. Brown and Wagner secretly hate each other... If it comes down to it, I am Team Dusty all the way.
5. Chiefs INF Seth Bynum was a fan of greenies. Do they ever test for marijuana? Because that would be awesome.
6. I wasn't kidding when I said "Dead. To. Me."

See you tomorrow.
Posted by Jenks at 7:40 AM

I own a Jed Lowrie t-shirt; I'm actually wearing it right now. I think I might be the only one, since they had racks and racks of them about two years ago, and that was when he was playing regularly.

I own a Mike Timlin shirt. They were out of BK Kim.