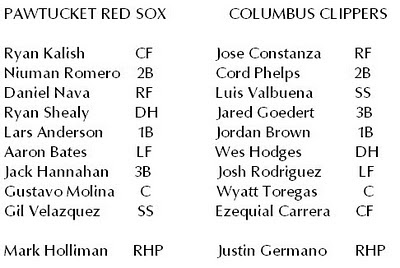 11-7 Columbus and SWEEP. It's not fair. All the teams with bad records have the best triple-A teams.

Red Sox starter Mark Holliman was responsible for seven Columbus runs, but let's not dwell on that. I'd rather imagine that Pawtucket's four home runs led them to victory! Gustavo Molina, three run homer? You saucy devil! GUSTAVO!!! Sexy name for a sexy catcher... Do it again!

Righty Justin Germano started for Columbus and was yanked with two outs in the sixth inning after... an Aaron Bates single? Ryan Shealy hit a homer in the sixth, but that wasn't enough? Anyway, the score at that point was 7-3 and Germano was replaced by Carlton Smith, who was no match for the Wrath of Gustavo. 7-6 Clippers... could the Red Sox be closing the gap?

But then in the bottom of the inning, Rich Hill gave up two homers, including one by Jordan Brown, still languishing in triple-A. Can someone take Jordan Brown, please, and give him a big league job? It did wonders for G. Jones!

Some other stuff happened... Bowden pitched well in relief, but you knew that because you read reliable news sources. This game was pretty much over in the first inning.

two things:
1. Anderson and Kalish also homered. They celebrated post-game with some lite beer in cans because they're bros, dog.
2. Luis Valbuena hit two home runs. Valbuena had been optioned down by Cleveland to work on his hitting. What a story!
3. Justin Germano did the Japan thing last year.
4. No Pawtucket 0-fers last night, as everyone got a hit. Gil Velazquez had two hits. Velazquez is batting .310 in his last ten games. GIL! TAKE US TO THE PLAYOFFS!
5. Yeah.

Tonight! Ramon Ramirez and Toledo's Furbush. And Kris Johnson gets the Barry Hertzler treatment and is sent down to Portland. YES!!!!!! Bring me Kyle Weiland!!!!!!!

If they do the thing where they're like, hey, Kris Johnson, we're thinking of converting you into a reliever, that means they probably hate you and you will fail in that role and they can say they tried, they tried to find a place for you but it wasn't working out... This is no longer a sentence, really, but it's a familiar scenario. It doesn't always mean they've given up on you, but in this case... I would be worried.

Of course, none of that may ever happen. Maybe Johnson turns it around in Maine and gains 28 lbs of pure Bowden-esque muscle. Candy, life is crazy.
Posted by Jenks at 8:01 AM