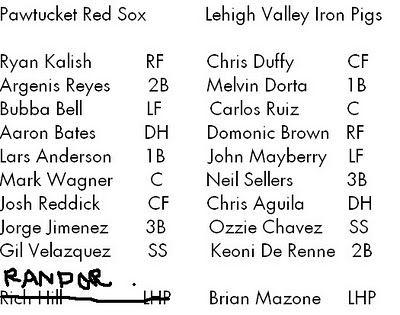 4-2 Pawtucket, Rich Hill gets the win.

The Iron Pigs countered with a more conventional starting pitcher: Lefty Brian Mazone. Mazone gave up all the PawSox runs! Oh, no, you are not supposed to do that Brian!

Picture it: The sixth inning... Red Sox down 2-0. With one out, Lars Anderson doubles to right field and later advances to third on a single by Reddick. And then the first thrilling run gets across by way of an RBI single by Jimenez.

Gil Velazquez then steps in with his fly-swatter with two outs. You'd think you could have predicted some anti-clutch Velazquez action, but not this time, Margaret. Velazquez hit a two-run double!

Velazquez even crossed home plate, thanks to the ensuing Kalish single. Whenever I'm feeling Kalish, I have a nice bowl of Portuguese soup. Delicious!

Finally, Mazone got the hook in favor of reliever Michael Stutes, who got the final out, even though he balked, walked Reyes, and allowed a double steal. Bubba Bell was the final batter in the inning, and Stutes struck him out.

Stutes went on to have a 1-2-3 seventh, striking out Bates, Anderson, and Wagner. That must have been cute.

teenage alcohol consumption:
1. Carlos Ruiz was rehabbing. If you click the link, you can watch some game video on the local news! PAW-tucket!
2. Did Lehigh Valley lose because Andy Tracy was not in the lineup?
3. This is just me and I'm probably wrong, but maybe Michael Bowden's gonna get traded. That's my theory. But remember, I also said Jon Lester was on the way out.
4. Chris Aguila is a n00b.
5. Aaron Bates went 0-4 with three K's. Man, is he tall!
6. Pawtucket left 10 runners on base. Remember like back in 200... 6? Maybe? And the Boston Sox would always leave runners on base and all the shitheads were bellyaching about it? As someone pointed out, THEY ARE PUTTING RUNNERS ON BASE, WHICH IS GOOD. Not everyone gets a ride home, you lying drunk!
7. Bubba Bell's alma mater is proud of him. New Orleans, eh? That explains a lot.

Tonight! The Pawtuckets stumble home and throw Robert Coello out here again. The Red Wings are in town! So go see Glen Perkins tonight. He loves all the attention.
Posted by Jenks at 7:51 AM