(and i knew every word by heart) 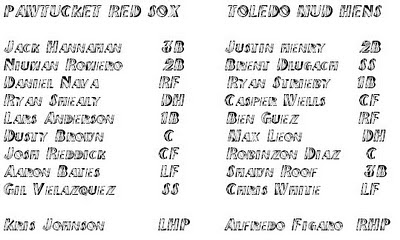 Pawtucket WINS! And a small group of people in Ohio are happy about it. Maybe Torey Lovullo had a cigar.

Here we go again, all the way from the start. Talking about Kris Johnson sucks my will to live, so let's skip to the next pitcher. Michael Bowden entered the seventh inning with a 3-2 lead and blew it. It was an RBI double by Justin Henry and an RBI single by Ryan Strieby that put the Mud Hens on top 4-3.

Dusty Brown led off the eighth inning with a double off reliever Daniel Schelereth. A sac fly by Reddick allowed Brown to scoot over to third, and then Aaron Bates hit a single. Tie game! Also, Bates is fifth on the team for RBI. Which surprises me, because I have no memories of Bates doing anything good.

Innings, innings, words, words and expressions... tied until the eleventh. Jay Sborz is pitching. (Sborz roommate in college was Matt Mildieu.) Hannahan singles, Romero sac bunts and gets to first to put two runners on with no outs. And then Ryan Shealy homered. TAMPA BAY IS SO STACKED THAT THEY CAN CHUCK GUYS LIKE THIS OVER TO ANOTHER TEAM! THE DURHAM BULLS ARE UNSTOPPABLE MURDER!!!

Robert Manuel closed the game out and he just makes it look so easy. He must be bored out of his mind.

to win back your love again:
1. Toledo starter Alfredo Figaro went five innings and gave up two earned runs.
2. Aside from Shealy's three-run torpedo, there were three bombs of the solo variety: Anderson, Brown, Hannahan. I'm guessing it was Hannahan's first Pawtucket home run. I'm sure he'll remember it forever and make a little scrapbook about it and file right next to his other scrapbooks about trips to the supermarket and his wedding.
3. This could be the funniest thing I've read all year: Toledo reliever Fu-Te Ni (pitched two innings last night and gave up a run) has an interpreter. Last night, the interpreter, Steve Xiu, played the national anthem before the game on the saxophone. You better read his story, because it's terrific!!
4. Toledo reliever Scot Drucker helped pass out socks for people who are in need. Of socks. 50 points for him!
5. Chad Paronto pitched an inning and a third and put up a sweet row of zeroes.
6. Gil Velazquez went 0-5 and dropped back to the bottom of the order. I guess his Power Tonic wore off.
7. Pawtucket left 13 runners on base.

Tonight! Mark Holliman! Come on, Mark! YOU CAN DO THIS!! Everybody loves you and thinks you dress really interestingly. Who's catching? Wagner? Wagner, make this happen!