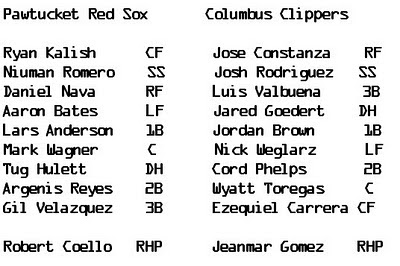 Robert Coello ate up five innings, but it wasn't too cute and he used up 98 pitches. Columbus scored five runs off RC, with home runs hit by Jordan Brown and Josh Rodriguez. Coello was tired, man.

Gomez' "relief" came in the form of an Ice Righty: Bryce Stowell. In the top of the ninth, Stowell got things off to a bright start by walking Nava and Bates. Lars Anderson singled Nava home... Stowell struck out Mark Wagner but walked Tug Hulett to load the bases.

But then Clippers manager Mike Sarbaugh did something crazy: He replaced Bryce Stowell with another reliever! Shut up! Get out! Yes, Stowell was replaced by Carlton Smith, who wiggled his way out of the game.

Gil Velazquez made the last out, in case you feel like getting angry about something like that. Damn you, Gil Velazquez!

hey, that's what i'm living for:
1. Jeanmar Gomez, here's to you! Gomez had just started up with the big club in Cleveland and impressed everybody.
2. Hitting coach Gerald Perry was ejected in the eighth for strike-zone bitching.
3. Catcher Mark Wagner went 0-4 with two strikeouts. Velazquez went 2-4 with a double. Velazquez, while not a slugger by any means, has shown a little pop lately. How pleasing.
4. Mike Lowell is with the team in Columbus. Hangin'. Doin' some guy stuff. Possibly keg stands with Chad Paronto and Tug Hulett.
5. Clippers lefty David Huff was (allegedly) supposed to get Gomez' start in Cleveland last week, but then this happened. Ha. Ha. Ha. Guess that kind of stuff happens after you get hit in the head. By A-Rod. Is there anything that guy can't ruin?

Tonight! Mark Holliman! That's great because I really like him. What I mean is, I like him. I am going to ask him out on a date! Maybe we can go to the scavenger sale... or to a wienie roast.