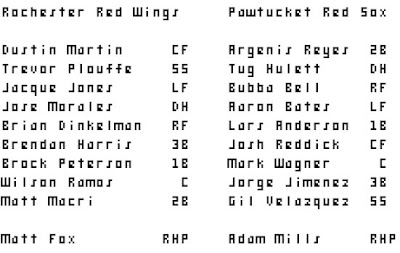 Five Rochester runs belong to starter Adam Mills, including back-to-back homers in the fifth. That must have left the crowd breathless!

Rochester starter Matt Fox also gave up five runs, but he only lasted through four innings. Pawtucket scored its first three runs in the second inning, when a Mark Wagner brought Anderson home from third. Jorge Jimenez followed that with a two-run home run to right field.

In the bottom of the fifth inning, with runners on first and second, Argenis Reyes sac bunted! YES! Good work, Reyes! Tug Hulett doubled to bring home Jimenez... Bubba Bell batted next but he was walked intentionally to get to Aaron Bates. Bates hit a sac fly to score Gil Velazquez. 5-2 Red Sox!

Rochester tied everything up in the next inning, with those back-to-back homers, but Aaron Bates pushed the team ahead 8-5 with a three run homer in the seventh.

The Red Wings started eating up the deficit in the eighth when first baseman Brock Peterson hit a solo homer off Paronto, but CP sacked up and got everyone else out. Good work, lads.

come on, it's such a joy:
1. Adam Mills pitched five innings. He struck out six and walked two. And I fell asleep thinking about it.
2. I used to really like Jacque Jones. I am sorry I missed him last night.
3. Tug Hulett went 3-5 with a couple of doubles.
4. I forgot to mention the return of Mark Wagner, but it's not because I dislike him. Not everyone loves Wagner, though... Wagner went 0-4 with a strikeout.
5. Red Wings outfielder Dustin Martin made the All-Star team... of hotness! No, he made the for real all-star team... of adorableness! That, and triple-A.
6. Rich Hill and Bowden also pitched.
7. Rob Delaney also pitched and got the loss in relief.
8. WTF? A Bill Hall-Tug Hulett comparison. I will say it was written back in February, though.

Tonight! Matt Chico will confront the merciless beast that is Fabio! Damn, I love Matt Chico.
Posted by Jenks at 8:57 AM

Holy smokes, Jacque Jones is still playing baseball? And in the minor leagues? Quick, no one tell Joe Torre. He's the type of "shiny veteran outfielder" that you figure some stupid team would find room for him at the end of a Major League bench.