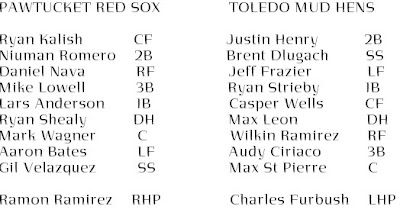 10-6 Pawtucket, thanks to former Marlin Mike Lowell. And probably Ryan Kalish, who's a sex machine to all the chicks.

But not you, Mark Wagner. I don't like the looks of you or your home runs.

Robert Manuel shrugged his shoulders in boredom and disdain and pitched a scoreless ninth with a couple of K's. WHAT NOW, EVERYONE ELSE IN THE BULLY?

Charlie Furbush must have had the fish, since his four innings were a disaster. Eight hits! Wow! In the first inning, Mike Lowell hit a two-run homer. In the second, Wagner did the same. Bates singled, Velazquez doubled, Kalish sac flied Bates across, and it was 5-2.

Wait, I forgot to tell you that the Mud Hens scored two runs in the first. But Lowell solo homered in the third and Kalish copy-catted it in the fourth. 7-2 Pawtucket!

Toledo did not score again until the seventh, when wicked tall Ryan Strieby hit a two-run double. And the eighth, when Ben Guez hit a two-run homer. BUT! Lowell had homered again in the top of the eighth. Why? Why did this happen? What kind of pitches was Lowell getting? I SAW LOWELL REHAB IN BUFFALO!!!!!! ME ME MEMEMEMEME!!!

To most people, this game was about Mike Lowell. To me, it was about Gil Velazquez' burgeoning hit streak. I'll bet Gil and Mike are work buds, like me and Hollie or Amanda. They do have a lot in commmon. I'll bet they talk shop. By this I mean they talk about what's under the hood, which is not a euphemism.

migajitas:
1. Niuman Romero went 0-4. Not a criticism, just an observation. Daniel Nava and Lars Anderson were also hitless, those lying drunk bastards.
2. Five RBI for Mike Lowell, which I'm pretty sure no one on this team has done all year. Can we get an intern to look this up? All the cool Pawtucket interns read Baseball Heavy.
3. Toledo reliever Josh Rainwater pitched three relief innings and did not give up a single hit. Fu-Te Ni handled the final two innings, but was much less effective (three runs).
4. Toledo's leadoff batter was someone named Justin Henry. Henry played second and went 3-4 with a double.
5. "Furbush wasn't very sharp. He had trouble locating his fastball, and his breaking ball was a little lazy." Hens manager Larry Parrish. (Toledo Blade)

Tonight! Robert Coello. Andrew Oliver. And Gil Velazquez.
Posted by Jenks at 10:08 AM