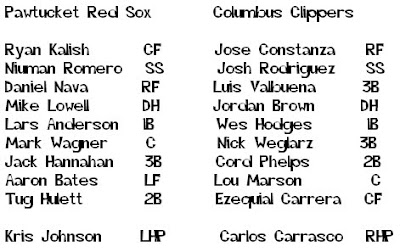 I am in a runaway mine cart of boredom, hurtling toward mid-summer burnout, but here goes. The heroic Ryan Kalish led off the game with a walk and managed to scoot around the basepaths to score a run. Aaron Bates hit an RBI double in the second to bring the score to 2-0.

Columbus picked up a run in the fourth, but the fifth inning is when the shit hit the fan. That's when Johnson gave up four runs without getting an out. Because he sucks and I hate him.

Clippers center fielder Ezequial Carrera led the fifth off with a single, which sounds innocuous but it's not, it's ominous. Another single by Constanza and an Anderson throwing error put both runners in scoring position. Josh Rodriguez was gentleman enough to hit an RBI single and score Carrera and TIE GAME!

After third baseman Luis Valbuena walked, Jordan Brown came to town (sorry) and POW! Double! Three more runs and goodbye Kris Johnson. Enter Fabio Castro, who I'm voting for team MVP even though there's no fucking way anyone would have the guts to give it to him. Fabio Castro makes me want to go to 8:30 mass every week.

Castro worked for three innings and the Clippers did not score during his tenure. How fucking hard was that?

Clippers starter Carlos Carrasco went four innings before being replaced by Jeremy Sowers, who wound up with the win. Reliever Shane Lindsay allowed the Red Sox to score a couple more runs, but it was just a tease and excuse me while I bash my head on my piano keyboard.

what bus crossed the ocean?
1. Ryan Kalish went 0-4 with a walk, but managed to make himself useful regardless. I have to agree with everybody (and I hate agreeing with everybody): Superstar.
2. Kason Gabbard is gone and Jack Hannahan is here! Don't worry: Gabbard will probably return to the team in 2013. Until then, I am giddy.
3. Hannahan grounded out with the bases loaded in the ninth. I don't have a problem with that.
4. This report claims that Jordan Brown's big hit was a triple, but I think that's wrong. DOUBLE.
5. Clippers reliever Shane Lindsay is Australian. Please read his story.
6. Pawtucket batters who came up with runners in scoring position with two outs and just left them there to die: Tug Hulett twice, Hannahan twice, Kalish twice, and Aaron Bates.
7. Robert Manuel pitched a tidy, scoreless eighth inning for Pawtucket. I will never say anything bad about Robert Manuel.

Tonight! For real this time, Mark Holliman. And Justin Germano for Columbus. I'm telling you, tonight they win.
Posted by Jenks at 8:03 AM