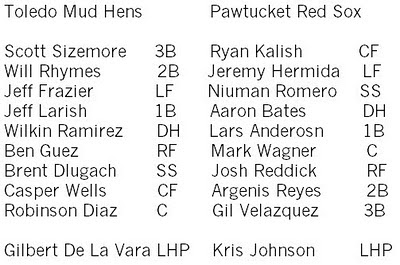 This game was stupid but I was hanging and I was having a good time. The fielding left something to be desired all around. You know what else is stupid? Rehabbers who HAVE to wear their usual number and wrest it from a hapless minor leaguer. It's rehab. It doesn't count. GET OVER IT.

Aaron Bates got two hits including a double, so theoretically his spirits must be raised. Toledo's Scott Sizemore and Jeff Frazier each homered.

et:
1. Check out these foul balls featuring Wagner, Reddick, Hermida, and Velazquez.
2. Bubba Bell got the night off.
3. Pawtucket got a slew of hits, but only got one guy across. Here are the kids who left runners in scoring position with two outs: Gil Velazquez (twice!), Tug Hulett (twice!), Lars Anderson, Aaron Bates, and Argenis Reyes. Oh, and Travis Denker showed up from the mists of 2009 to follow suit. Just for old times sake!
4. Triple-A is the true home of baseball dreck. Does Boston even really try? Where do they find these guys? What I am trying to say is, KASON GABBARD WTF?!
5. Gilbert De La Vara is a new kid in the Detroit org, selected from the independent Golden League's Yuma Scorpions. Please consult this story for more, even though it is primarily about Bill Pulsipher and his anxiety problems.

Today! Fabio Castro, Scott Drucker. Drucker? Should be a MAD game. (Sorry.)
Posted by Jenks at 10:34 AM