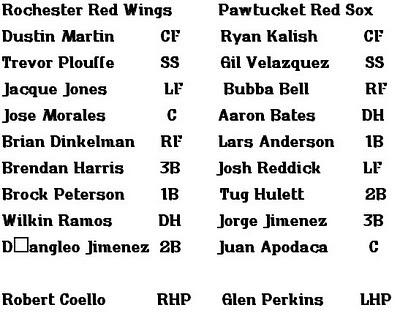 And Glen Perkins is still a lefty! 9-2 Rochester as they put up a series of deuces on the scoreboard.

Glen Perkins was a six-inning freak. He did allow nine hits, but Pawtucket has, at times, struggled to get runners across. I don't know if you knew that. It's almost as if their best hitters were stolen from them!

Reliever Blake Maxwell and his perfect hair allowed another pair of runs, and tough guy Tommy Hottovy coughed up the ninth run. Fernando Cabrera came in pitched a scoreless ninth and I wish I could have seen it.

Bubba Bell nearly started a honking great rally in the ninth 'cause he hit a single, but co-shitheads Aaron Bates and Lars Anderson couldn't do anything with that. Rochester is last in the division, but that's okay! The only team in the league batting worse than Pawtucket is Norfolk... yes, the Orioles triple-A team. HOW DARE YOU NOT MOUNT A COMEBACK, YOU GUYS!!

Pawtucket scored its first run in the fifth with a bunch of little singles and an Anderson RBI. Jorge Jimenez hit an RBI single in the eighth to give the Red Sox their second run. The funny thing is, Jimenez was on second and Apodaca was on first, but when Kalish singled it hit Apodaca... OUT!! THIRD OUT!!! Kalish, you were robbed. That's show biz.

you could tell i was no debutante:
1. Trot Kalish went 4-5 last night, but was only batted in once. Aaron Bates went 0-5 and he struck out four times. Holy hell. I do not think he should be in the lineup tonight. He may need a 'mental break', which is something baseball managers always say when they mean something different.
2. Does anyone have a place on Block island I could hit next week? I'll give you a Photo Star! I have a whole bunch!
3. Blake Maxwell hit Brendan Harris and Brock Peterson with pitches. I accidentally typed 'Borck' Peterson, which would be an awesome name.
4. They gave away free hats at this game, which people line up for before the game. Although I have less money than bagels right now, nothing free is worth it if it's not something you would spend money on in the first place.
5. This thing happened: "Iron Pigs pitcher Oscar Villarreal didn't like the ball and tossed it into the dugout, where the bat boy stopped it... After a conferring of umpires, because the ball was in play and timeout had not been called, Velazuez (sic) was awarded two bases, going to third base, the rule being that if a pitcher commits the crime with his foot on the rubber, it is a one-base penalty -- with his foot off the rubber, a two-base penalty." - Attleboro's Peter Gobis
6. I don't get it - This 'live from McCoy Stadium' blog post feels incomplete. Where is the rest of it?